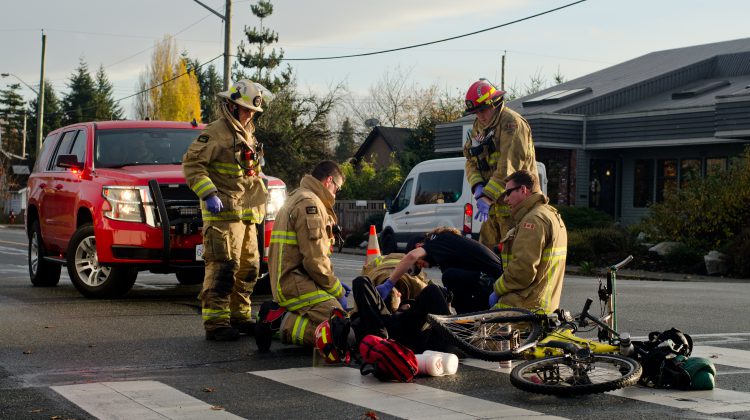 Members of the Courtenay fire department and paramedics respond to a collision between a cyclist and a car at the intersection of 10th Street and Fitzgerald Avenue on November 15th, 2018. Photo by James Wood/98.9 The Goat/Vista Radio

COURTENAY, B.C- A male cyclist has been taken to hospital after a collision with a car in Courtenay on Thursday.

The incident took place at the intersection of Fitzgerald Avenue and 10th Street, close to downtown Courtenay. The man had been riding a mountain bike when he collided with a red car being driven by a woman, though the exact circumstances of the collision remain unclear.

The bike was left with a severely bent front wheel, while the man ended up on the ground in the intersection. Bystanders and first responders helped the man, holding his head, and no major injuries were visible, though he appeared to be shaking.

According to Courtenay fire chief Don Bardonnex, the man was in his mid 30’s, and there were no apparent life-threatening injuries.

The car appeared to have been going west on 10th Street, while the cyclist had been going south on Fitzgerald, possibly on the sidewalk. He had been wearing a helmet.

The cyclist was taken to hospital via ambulance, and no other injuries were reported from the scene.

Bardonnex advised all residents of Courtenay to watch out around intersections, whether they’re driving through or crossing the street.