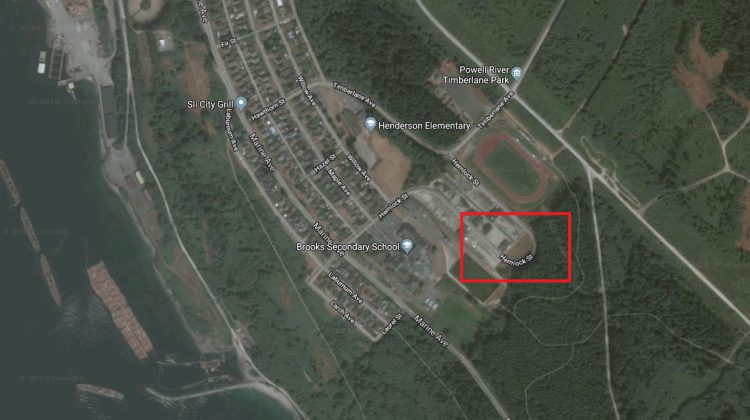 The rough area of the roadway is highlighted on a photo sourced from Google Maps.

POWELL RIVER, B.C- Powell River’s municipal government has been ordered to get rid of a road.

According to an order issued by the province’s Agricultural Land Commission on October 22nd, 2018, the city is contravening provincial legislation on the use of land in the Agricultural Land Reserve (ALR), due to a section of roadway constructed along Hemlock Street.

The roadway is located off Timberlane Avenue, with a long curve at the bottom looping around to the other side of the neighbourhood. The long loop is the roadway at issue, as it been built onto ALR land.

The discussion between the city government and the land commission on the matter has been ongoing since 2016, according to the order from the commission.

The discussion came to a point where the order was issued, after the city’s CAO Mac Fraser sent an email on June 5th of this year to the commissions CAO Kim Grout. In that email, he acknowledged the city’s approval of the road intrusion into the ALR had been inappropriate.

“It is clear the unauthorized construction of an asphalt road on the property has caused damage to agricultural land,” read the order from Grout.

The  city has now been ordered to remove the road and all fill, re-mediate the property in and around the road to ensure the soil is similar or better to before the fill was brought in, and make an application to have the right of way removed.

The work must be overseen by a “Qualified Environmental Professional”, with a report submitted by that professional after the soil removal is completed, no later than February 28th, 2019.

The requirements of the order have to be met by August 31st, 2019, unless the remediation order is changed.

Failure to comply could result in a penalty of $100,000, a court application for a compliance order, or “other enforcement measures’.

The city had 60 days to appeal the order from the date of the letter.

According to Scott Randolph, the city’s director of economic development and communications, Powell River’s city council has been briefed on the letter and city staff are working on options for their review.

There was no timeline available for when council would be presented with those options.