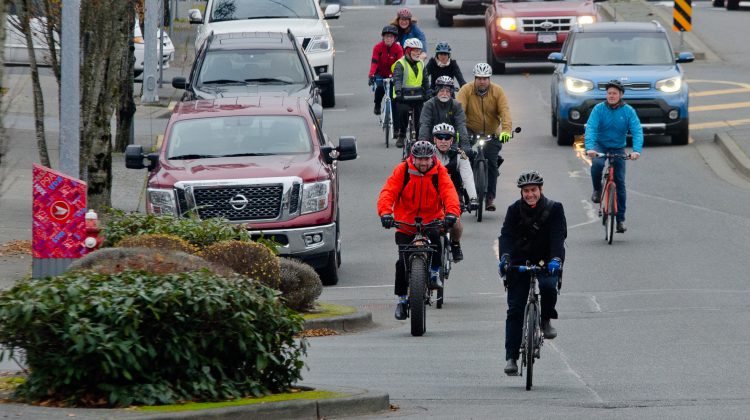 Courtenay council members ride down 8th Street on the afternoon of November 19th, 2018. Photo by James Wood/98.9 The Goat/Vista Radio

COURTENAY, B.C- Residents of Courtenay may have seen the mayor biking downtown today.

Mayor Bob Wells and most of city council got together at the Broken Spoke around 2:45 this afternoon in downtown Courtenay, and joined up for a bike ride to City Hall. They were joined by new Comox Valley RCMP Inspector Mike Kurvers, and other community members in their ride.

“I think it’s something that many of us are doing anyways, so we just thought, since we’re doing it, and we’ve been talking about this since the election,” said Wells, prior to the ride.

“We said “let’s all cycle to city council at once” and try to raise the awareness. This is a viable way of getting around our community.”

The group followed Fitzgerald Avenue to 8th Street, and then headed downhill along the road. The ride was an hour before the regular council meeting at 4 p.m. 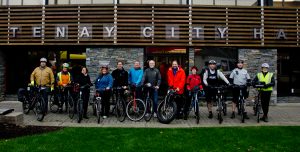 The ride participants are pictured outside Courtenay city hall on November 19th, 2018. Photo by James Wood/98.9 The Goat/Vista Radio

There were no cycling-related items on the meeting’s agenda.