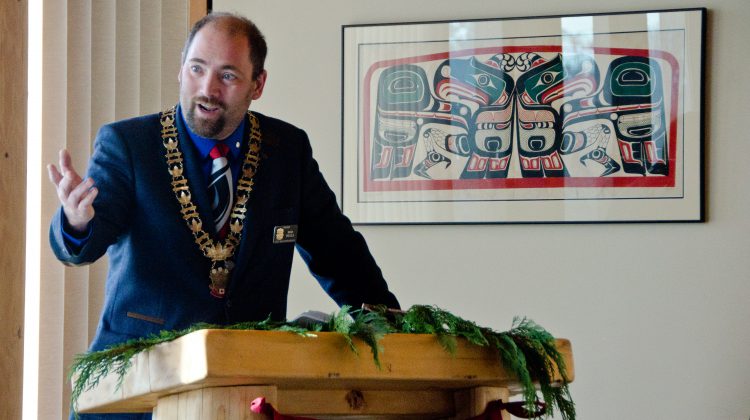 Courtenay mayor Bob Wells speaks during prior to the signing of an MOU for the former site of the Field sawmill on November 14th, 2018. Photo by James Wood/98.9 The Goat/Vista Radio

COURTENAY, B.C- The City of Courtenay will be losing some revenue with the restoration of the Field Sawmill site.

The work is being led by Project Watershed, who are currently leasing the site along the Courtenay River from Interfor, the forestry company that owns the land. The non-profit is working to raise funds towards the purchase and restoration of the site, a cost which has been estimated at $6.5 million.

The plan for the site is for ownership to be held between the City of Courtenay and K’ómoks First Nation (KFN), with a conservation covenant in place. A memorandum of understanding on that plan was recently signed by KFN, the city, and Project Watershed to that effect.

The MyComoxValleyNow.com newsroom reached out to the city to figure out how much that might cost Courtenay’s municipal government.

According to city administration, a total of $5,000 in support was put towards the Nomadic Tempest fundraising performance in the summer, and the city has agreed to offset up to $135,000 of property taxes over the next two years on the property.

Efforts are also underway to seek federal and provincial funding, as well as other grant sources, in order to make the project happen.

“Project Watershed is spearheading a fundraising campaign,” read a statement from the city.

“So far, they have raised $277,000 from the community and almost $1 million in total from foundations and government agencies. The total project will cost about $6.5 million, including restoration.  Some of the benefits of this project to the City of Courtenay include the potential for flood mitigation through returning the property to a natural condition – this is known as “Natural Asset Management”, a potentially cost-effective form of storm water management. Courtenay was selected for a national pilot project earlier this year to develop an action plan for flood mitigation in the downtown core through a combination of natural assets and the built environment.”

According to Courtenay mayor Bob Wells, the offset of property taxes will be going towards Project Watershed, as they currently pay those taxes as part of their lease.

“We’ve said, “Well rather than you guys having to pay these property taxes, we’re going to look after that”, until the project is completed, or for two years,” said Wells.

“If we run into any hiccups, then obviously we’ll revisit that, and see what needs to be done, but that’s what we’ve agreed to so far.”

Wells stated there have not been any requests to have the city contribute more money.

“Right now, I think Project Watershed is working quite diligently, not just to get those individual donations, but actually going after larger grants, both provincially and federally, to make sure that we can get up to that purchase price as quick as possible,” said Wells.

“To that end, I have spoken to our premier John Horgan as well as our MP Gord Johns to make sure that this is something as a municipality and as a community that we want to make sure is supported by our senior levels of government.”

He also indicated that members of council had been working to raise money for the project.

“As people, we have been supporting this project,” said Wells.

“So, we definitely, if there are challenges, we want to be having those conversations. Would we entertain paying money directly for the purchase? That’s a conversation, that when it comes forward, I’m sure our council would have that conversation. It would be way too hypothetical for me to say that we would put money towards, when we don’t even know if it’s required or what that amount would be.”

He believed it would have many positive effects.

The site needs to be purchased no later than December 20th, 2019. If the required funds are not raised by that point, the site will go back on the market.