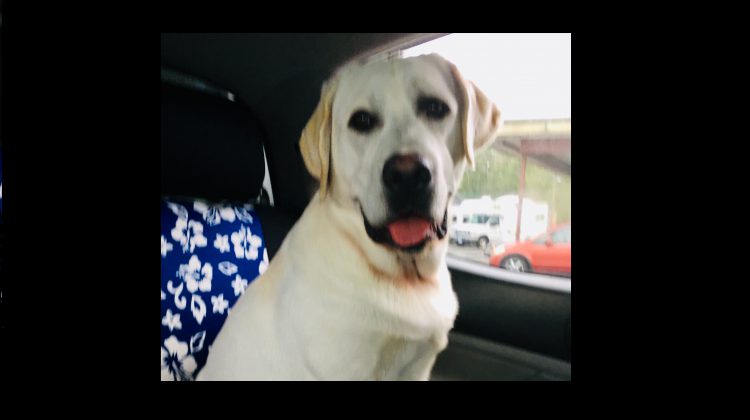 COMOX, B.C. – A Comox woman is still in shock after a senior allegedly bear-sprayed her dog recently.

Liz Lyle-Mattson said she was taking her nine-month-old lab Buddy for a walk near Highland Secondary School when she encountered an older couple in the northeast woods.

“They started yelling at me that all dogs that are in Comox need to be leashed,” Lyle-Mattson told the MyComoxValleyNow.com newsroom. “They were kind of aggressive.”

She responded by telling the couple – who she estimated was in their early 70s and had British accents – that they were in the northeast woods and that all dogs are off-leash in that area.

But to be safe, Lyle-Mattson called Buddy back to put him on a leash.

“I was going to go back into the woods,” she said. “I wasn’t going to proceed to walk past them because I could see that they were angry that my dog wasn’t on a leash on the trail.”

Buddy was barking and wagging his tail and, according to Lyle-Mattson, the man pulled out bear spray and sprayed the dog in the face.

Lyle-Mattson said that after Buddy was sprayed he started rolling in the grass.

“He had it (the bear spray) all over his face and in his eyes,” she related. “Then I was mad and was yelling, ‘I can’t believe you just sprayed my dog.’”

She alleged that the couple yelled back to her that all dogs need to be on a leash in Comox.

“I swore at them,” she said. “I said ‘You guys are crazy’ and I was really upset and I could feel the adrenaline hitting in. But I didn’t confront them anymore because I got a sense that they were actually quite vigilantes about the situation.”

Lyle-Mattson alleged that Buddy had ‘liquid-ey and oily’ pepper spray in between his eyes.

She reported the incident to the RCMP.

“It’s legal, you can buy it, but people aren’t to be just randomly spraying like that,” Lyle-Mattson said, regarding bear spray.

“It was really traumatic and even talking about it now, I feel pretty upset about it.”

According to Lyle-Mattson, Buddy is fully recovered after having “a bad night that first night.”

Lyle-Mattson’s mom, who also has a dog, put a sign up in the northeast woods warning about the incident. 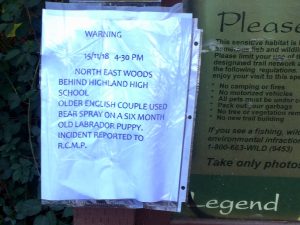 “I understand the leashing thing but I just think it was an unwarranted attack on a puppy,” Lyle-Mattson said. “To be spraying a dog with bear spray right in the face… I was going back into the woods with my dog. I was calling him back.”