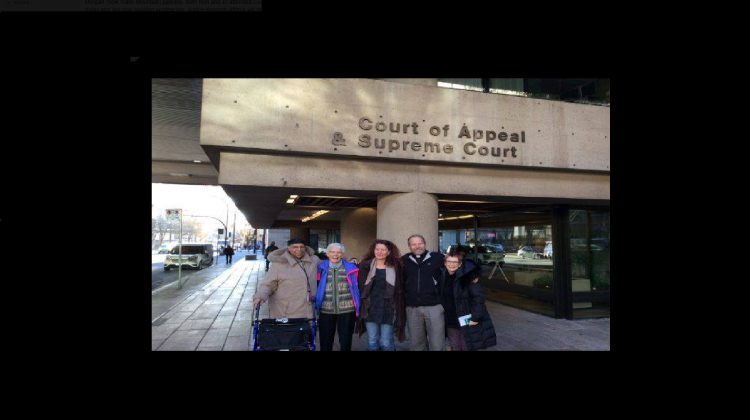 POWELL RIVER, BC. – Two Powell River residents are awaiting sentencing after being arrested for their part in a blockade against the Kinder Morgan (now Trans Mountain) pipeline.

The arrests came on May 18 at Kinder Morgan’s Burnaby terminal.

According to the group UnspOILed Coast, Justice Kenneth Affleck will decide Thursday whether to sentence them to jail, or conditional or intermittent sentencing.

In a statement on Facebook, the group said “We at UnspOILed Coast feel a great gratitude to them and the many like them who have consistently and willfully put themselves on the line to defend our coast, and to stand up to Kinder Morgan, the Trudeau Government, and the big business of oil that threatens our future.”

Both Berezan and Murray provided statements to the court.

Below is part of Berezan’s statement:

“On Friday, May 18, I joined with my dear colleagues here today and with many others from the Sunshine Coast, from the Islands, and from the Lower Mainland to stand together at the gates of the Kinder Morgan tank facility in Burnaby.

None of us took this decision lightly.

As we prepared to make our way to the gates that morning, we were blessed by elders and by the singing and the companionship of others who had gathered with us.

There was no anger, no violence, no disrespect.”

Later in the statement, Berezan said,  “How can the approval of a pipeline expansion that would triple tar sands extraction and bring a seismic increase in emissions long into the future be justified in the face of such an urgency? Clearly it cannot. To do so would be a tremendous moral failing not only to those whose lands and lives would be directly impacted by this project but it would be theft from future generations whose very ability to have any reasonable quality of life would be stolen from them.”

“Fuel extraction and export, climate change and social justice issues are inseparable. The KME/TransCanada pipeline, represents all of the destructive actions of industry/corporations/governments that place interest and profits over just action. This project further increases carbon emissions, will not meet our PARIS commitment, and propels us further toward climate catastrophe. There is the need to change the way we think, make decisions, and subsequent actions we take.”