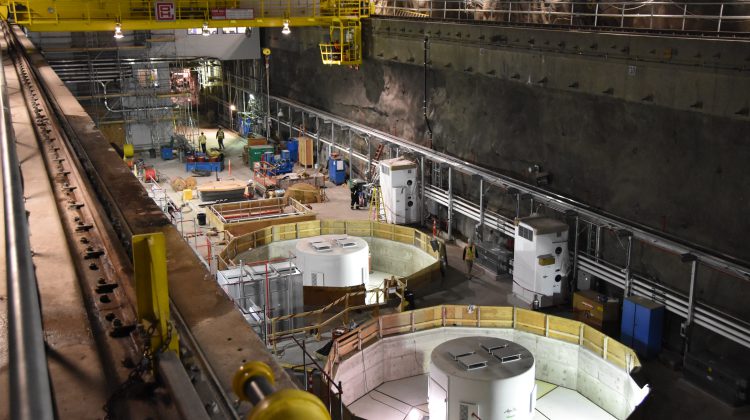 The new generators are underground. According to B.C. Hydro, the new facility generates 10% more power than the old one, protects fish habitat, and is seismically sound. Photo courtesy of Stephen Watson, B.C. Hydro spokesperson.

The original plan for the replacement station had a traditional surface powerhouse, which would have required an extensive steel-lined section of the power tunnel. Instead, the new underground powerhouse avoids the required steel lining, which made it more affordable.

Environmental considerations drove the design and construction of the new station. Now that operations are underground, the old station’s three penstocks will be removed soon, and the 1.8 kilometre-long penstock corridor will be restored to a forest setting. Restoring the corridor reduces the project’s environmental footprint.

“Our team has worked hard on this project since it was initiated in 2007 and we are very pleased to have a generating station that is reliable, seismically strong, and protects downstream fish habitat from river flow reductions,” said Melissa Holland, Vice-President of Project Delivery, BC Hydro in a statement. “It is a big improvement over the 71-year-old above ground facility. SNC-Lavalin and their team have done great work, and were very innovative with the placement of the powerhouse. The design is also a benefit to the community and adjacent Elk Falls Provincial Park.”

The John Hart project is the first public-private partnership project in Canada’s hydro sector. SNC Lavalin created “InPowerBC” to enter a project agreement with BC Hydro, which saw them partially finance, design, build the new generating facility and maintain it for 15 years.