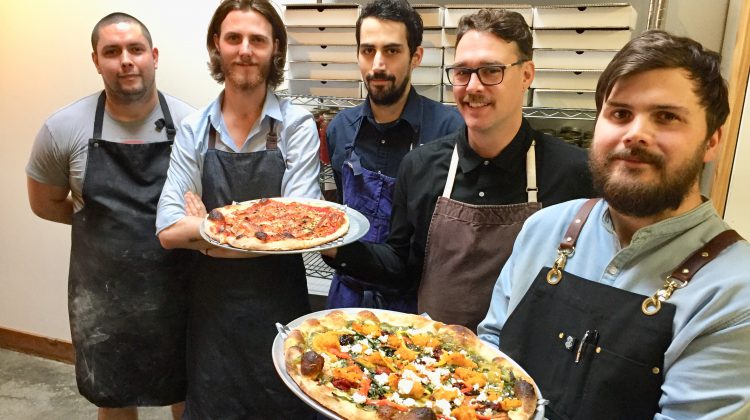 The staff at Pizzeria Guerrilla got together for a group photo at lunchtime today. The pizzeria on 5th Street is hosting its grand opening in conjunction with the Moonlight and Magic street party in downtown Courtenay. Photo by Troy Landreville/98.9 The Goat/Vista Radio

COURTENAY, B.C. – Sure, Pizzeria Guerrilla has been up and running for nearly 40 days,  but who’s counting?

And while its been open for just over a month now, the pizzeria on 5th Street waited until today to celebrate its grand opening, as part of the Moonlight and Magic Celebration in downtown Courtenay.

“We’ve been having a great time here,” Pizzeria Guerrilla owner Jason Uglanica said just past noon today. “We’ve decided to take the training wheels off and we’ve had 30, almost 40 some-odd days of soft opening and felt maybe it’s time to have our grand opening and have a bit of a party, so that’s what we’re doing.”

Part of the grand opening is music starting at 9:00 p.m. inside the pizzeria, and the tunes will continue until closing.

Uglanica had also owned the Taqueria Guerrilla inside Gladstone Brewing Company, before closing the eatery earlier this month to put his sole focus on Pizzeria Guerrilla.

Taqueria Guerrilla had started up in May, after the former pizza restaurant that worked out of the brewery moved to the new location on 5th Street. That move came in conjunction with the closure of the Guerrilla Food Company’s frozen food store-front.

According to a statement on the Taqueria Guerrilla Facebook page, “with the newly completed Pizzeria Guerrilla now open on 5th Street, we have decided to focus our energy into making it the best it can be.”

“The Guerrilla Food Co. has transitioned in the last five years,” Uglanica said. “It’s essentially opened up four different spaces, two of which we have closed down, and have decided to focus on this (Pizzeria Guerrilla). When we moved into Gladstone with the pizza, that was awesome. It was a great opportunity to be able to be part of the downtown hub, there.

“(But) the idea was always that, as we developed something, we would be able to survive on our own. And that’s what we got the opportunity to do. When we were approached to look at this space, it took a lot of thinking, but we say yes.”

Pizza is a passion for the guys behind Pizzeria Guerrilla.

“Pizza’s special,” Uglanica said. “And now that we’ve got the entire kitchen together, the amount of varieties of things that we can do that complement it, it just makes for an… experience that I want to eat at.”

The grand opening is part of Moonlight and Magic, a downtown celebration with a Viking theme.