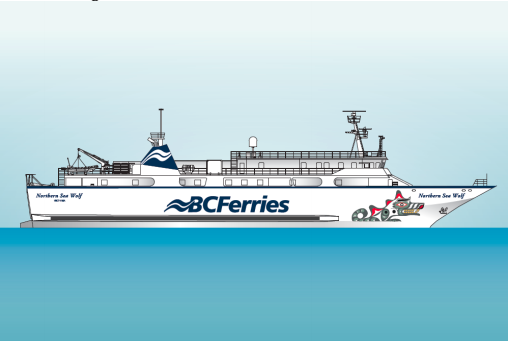 According to a release from B.C. Ferries, Richard Hunt from the Kwakiutl First Nation and Danika Naccarella of Nuxalk Nation designed two new works that will adorn the vessel. The designs will be seen on the exterior and the interior of the Northern Sea Wolf.

“I am proud to showcase the beauty of Nuxalk art with my design for the Northern Sea Wolf,” said Naccarella in a statement. “I hope my artwork will help inspire youth in our community and the next generation of Indigenous artists.”

The First People’s Cultural Council issued a call for artists to submit portfolios for consideration in December 2017. A jury made up of artists and B.C. Ferries representatives put together a shortlist of artists who were then invited to develop design concepts for the Northern Sea Wolf. Richard Hunt and Danika Naccarella were selected to develop the designs.

B.C. Ferries and stakeholders named the Northern Sea Wolf in honour of a First Nations’ legend that the sea wolf is a representation of the orca. The designs portray the Sea Wolf as a symbol of family, loyalty, and protection for those travelling the waters.

Starting in the spring of 2019, the Northern Sea Wolf will provide direct summer service between Port Hardy and Bella Coola, with a connecting service once a week between Bella Coola, Bella Bella, Shearwater and Ocean Falls.

Bookings for this route will start in the summer of 2019.