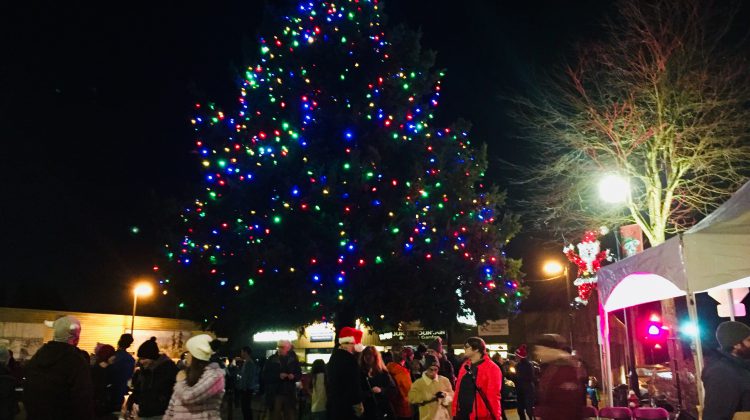 The lighting of the Christmas tree in downtown Courtenay was part of the festivities on November 23, 2018. Photo by Troy Landreville/98.9 The Goat/Vista Radio

COURTENAY, B.C. – It was a chilly night, but that didn’t stop Valley residents from checking out the Moonlight and Magic festivities in Courtenay on Friday.

The downtown event’s theme this year revolved around vikings and Scandinavian culture.

“The reception was great. What we love is that when you give people an opportunity to dress up in the Comox Valley…people are looking for opportunities to do that,” said Meaghan Cursons.

Cursons served as the producer of the event, working alongside the Downtown Courtenay Business Improvement Association (BIA).

“There were well over 100 people that costumed right up and showed up for the costume contest.”

Cursons said she actually had to grab extra gift certificates before Moonlight and Magic started due to the number of people that dressed up.

“We were just amazed, everyone from kids to families and groups of friends just really embracing the theme,” she said.

This is Cursons’ seventh year with Moonlight and Magic, and she said they wanted to mix things up this year for the event’s theme.

“It seemed like it (the viking theme) has this sort of cultural pulse around it…the Vikings series is really popular and it’s a cold night, and I thought “well how can we get people excited about coming downtown on a night that can be kind of chilly”, so we thought we’ll do the fire pits and we’ll encourage people to layer up in fake furs and old fur jackets and things like that,” she said.

“Comox Valley Rotary came down with a tent and served apple cider with spice in it and we had the fire show at the end. It’s like, what can we do to drive the winter away but get us in that sort of super awesome spirit of Yule and Christmas.”

As part of Moonlight and Magic, shops along 5th Street remained open until 9:00 p.m. There was music playing, and smiles all around.

“(It was about) coming down to the heart of your own downtown with locally-owned shops and businesses, art galleries, musicians, artists, local DJs and charity groups…and have a party right downtown while spending money in the shops that are owned by local shopkeepers that are re-investing into our community sports teams, arts and culture, things like that, every single day in the Comox Valley,” Cursons added.

Moonlight and Magic also featured dance parties for all ages, with DJs set up at three intersections, a visit from Courtenay-Alberni MP Gord Johns, face painting and the famous Christmas tree lighting.

Wendy Nixon Stothert lead a choir in a viking tavern song for attendees on the steps of the Comox Valley Art Gallery.

The Comox Valley Viking Suns, a group that focuses on Scandinavian culture was downtown sharing information.

“A huge thank you to the merchants of downtown Courtenay for what they do. They’re making an investment back into the arts community…it really is like a flow in-flow out, they are really contributing on so many levels to the community and we’re happy to bring that cultural energy downtown,” Cursons said.

She also thanked all the event’s sponsors and people who donated, as well as residents of the Comox Valley who attended.

She said organizers will take the next few days off, and then talks will begin for next year’s Moonlight and Magic in downtown Courtenay.