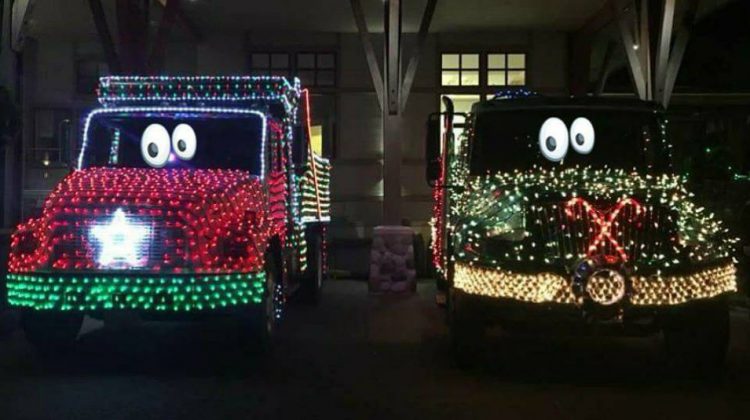 Two of the trucks decked out for the festivities in 2017. Photo courtesy Comox Valley Christmas Light Trucks on Facebook.

The famous trucks are decorated each year as part of an initiative started by Erin Kaetler and her husband.

The duo operates Courtenay-based Strate Scape Landscaping. Kaetler said one of the company’s trucks, along with vehicles from other businesses in the area, are decked out with Christmas lights and drive around different neighbourhoods.

“We decided that since we had spent all the time decorating the trucks, that it would be nice to be able to get out and see people that can’t maybe get out for mobility reasons and bring the trucks and Christmas lights to them,” Kaetler said.

“So we started visiting the seniors’ homes in the Valley, and we drive around to areas where we know there maybe kids who are battling illnesses that couldn’t get out, and park in front of their house so they can look out and see us…just trying to bring joy and Christmas lights to people in the Comox Valley.”

The trucks were put in focus during the 2017 holiday season. Kaetler said one of their drivers was pulled over by the Comox Valley RCMP.

Following that incident, the trucks were no longer allowed to drive around with their Christmas lights on, and were unable to visit local neighbourhoods.

Kaetler said before the pull-over incident, she had submitted a letter to the local police detachment.

“It really kind of backfired on us because as soon as we said that we were doing this, rather than call me, the inspector decided to just pull us over and said that we couldn’t do it at all,” she said.

“We tried to work with them and just ask if there was some way we could go through the neighbourhoods with our lights on and we were told that no, we weren’t allowed to drive with our lights on, we had to be completely stationary.”

Kaetler said the crew made adjustments to their plans and set up at different parking lots, so Valley residents and visitors could come see the lights.

She added that they also collected donations for the Comox Valley Food Bank.

Kaetler said a change within the Comox Valley RCMP has brought new light to their cause.

“With the new RCMP Inspector Michael Curvers coming in, we’ve talked with him and Corporal Tori Cliffe, and they’ve just been so supportive of us,” she said.

“They really want to support the community and have worked with us to support what we’ve done in the past.”

Kaetler said the trucks will be allowed to drive through neighbourhoods of the Valley, but have agreed to keep their Christmas lights turned off on main roads and intersections in the region, to minimize distractions for other drivers.

The trucks are going to be a part of the Cumberland Christmas parade on Saturday, December 1st, preceded by the parade in Campbell River on Friday.

However, she wanted residents to know that they are a separate entity from the community-organized parades.

“It gets confusing because people do tend to think that we’re referring to the parades a lot, we have to explain that we do the parades, but what we do as a couple of trucks is different from the parades,” she said.

“It just started with my husband and I wanting to do something for the community and to teach our kids about bringing joy to other people, and selflessness…it really evolved over the last few years.”

She said it’s a busy time for the truck drivers, and they try to hit as many neighbourhoods as they can.

“It’s a lot, and we don’t want to be out too late keeping people and kids up, so there’s sort of two to three-hour window each night that we can do this,” she explained, adding that they only drive in neighbourhoods in the Comox Valley.

Kaetler said the Strate Scapes Landscaping truck will be stationed at Crown Isle as part of the resort’s Christmas events a couple of nights in December, along with Pilon Tools’ truck.

She said the community response over the years has been very positive overall, especially at the seniors’ centres that they visit.

“They’re so appreciative. It’s so rewarding…we’ve had people say to us that they’ve had a really tough year and Christmas is a hard time for them but we brought joy to them, and say that we’ve really brought back the spirit of Christmas,” she said.

“The people in the seniors’ homes and care facilities that can’t get out, they don’t get a chance to see Christmas lights, and the way their face lights up when they see us is really heartwarming. It’s why we do it.”

More details on the Comox Valley Christmas Light Trucks can be found through a Facebook group dedicated to the initiative. That group can be found via this link.