Founder of Merville Water Guardians recognized by the Council of Canadians 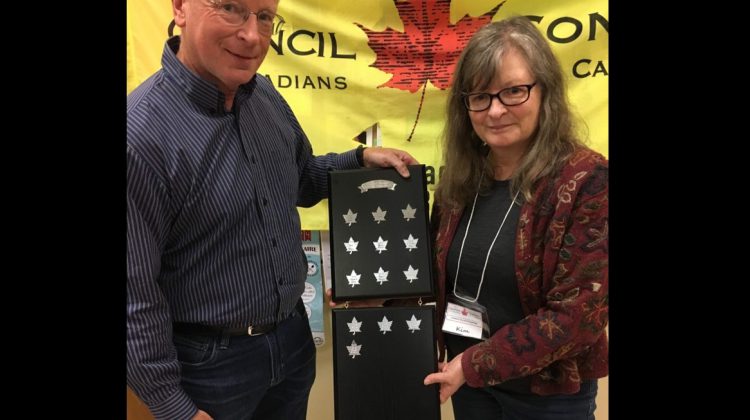 Bruce Gibbons receiving his award from the Council of Canadians.

UPDATE: The Merville Water Guardians’ petition is now available online. It can be viewed via this link.

Gibbons is the founder of the Merville Water Guardians, a Vancouver Island group that works to protect local aquifers.

He’s received a Community Action award from the Comox Valley chapter of the Council of Canadians.

“They decided this year (that) with the work I’ve done on the Merville water bottling issue and protection of our aquifers in general, that I deserved to receive this award,” Gibbons said.

“The one thing, as I said to them when I was accepting the award, that I haven’t done this to get any recognition but having said that, it’s nice to have a group like the Council of Canadians recognize and appreciate the work I’ve done and it helps to validate that the effort is worthwhile.”

Earlier this year, a rezoning application was put forward to bottle and sell groundwater from a residential property on Sackville Road in Merville.

After months of discussion, which included the founding of the Merville Water Guardians, the Comox Valley Regional District denied the application.

However, Gibbons said that the water bottling operation’s license is still in effect.

“Our understanding is that the applicant has applied for an amendment to his license to allow him to truck water to another venue where it would be allowed to be bottled,” he said.

“We’re following up to try and get that amendment application denied.”

Gibbons added that he’s also been following up with the Strathcona Regional District and other surrounding areas to ask them to change their bylaws so they don’t allow water bottling in their zoning bylaws.

“To that end, the Strathcona Regional District came on board very quickly and put through a change to their bylaws to prohibit water bottling, and they’ve also come up with a public statement that they want to take that Island-wide,” he said.

“I’m still contacting the Forests and Lands Ministry to find out about the status of the amendment application. We’re still pushing forward with the Environment Ministry to try and get some changes made to the Water Sustainability Act to protect our aquifers a little better. All those things are still going ahead very slowly, because nothing happens overnight…it does take a lot of time and I continue to put in the time that it takes to protect B.C.’s water.”

Gibbons said the Merville Water Guardians have also started a petition to the provincial government, asking them to stop approving licenses to bottle and sell groundwater. He said they’re in the process of moving that to an online petition.

“The B.C. government doesn’t accept online petitions but if we can get a lot more support province-wide by going online, that’s evidence we can use to support our petition,” he explained.

“It’s not official (the online petition) as far as the B.C. government is concerned, but they can’t ignore it if we get thousands of signatures on an online petition.”