Courtenay man wants a roundabout at 17th and Cliffe 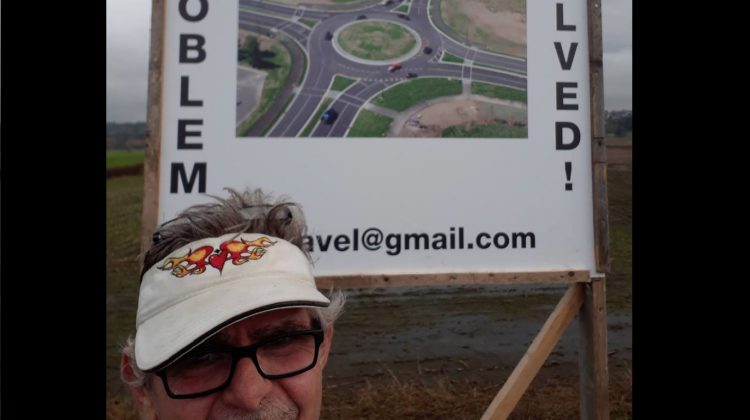 Glen Gravell has proposed the idea of a roundabout on either ends of Courtenay's busy 17th Street Bridge. Facebook photo.

COURTENAY, B.C. – A man in Courtenay wants something to be done to curb gridlock in the city.

Glen Gravell spoke with the MyComoxValleyNow.com newsroom on Sunday and suggested that two traffic circles, also known as roundabouts, could be constructed on either end of the 17th Street Bridge in Courtenay.

“If you’ve ever been anywhere that they use traffic circles, they tend to keep traffic moving, which is what that area needs,” he said.

“I mean, there are two traffic lights and everybody’s getting stopped up, and the traffic sometimes gets backed up to the (K’ómoks Band Hall) and in through town and out the other way. I thought that’s why we all came out here to live, to not have to put with that sort of thing.”

Gravell noted the gridlock could cause issues when it comes to emergency vehicles passing by the area.

“If you’ve got the traffic all stopped because they can’t move, and an emergency service vehicle drives by, people can barely even move their cars to get out of the way,” he said.

Earlier this month, Gravell set up a sign proposing the idea by the major Courtenay intersection. He said he received one email from a concerned resident, who wanted to learn more about the proposal.

He was also able to get in touch with Courtenay mayor Bob Wells.

“I have to give Bob Wells credit. He could have pulled it (the sign) down the very first day, and I think he left it up there for a week,” Gravell said.

“Because I hadn’t gotten much input, I saw a police officer parked down there, and I asked him. He said, ‘I don’t think traffic circles are very good because people don’t know how to use them’”.

Gravell said one of the big problems with traffic circles is that drivers pull up and start looking at all the cars that are using the roundabout.

“The way they’ve gotten around that in other places is they’ve placed something in the middle of the traffic circle, so you can only look left and if nobody’s coming, then you go. It’s really easy to occupy, to build and maintain and use,” he said.

He added that for the people that think no one can use traffic circles, when the center of the circle is filled with foliage or something else that can’t be seen through, they become a lot easier to use, because cause all the entering drivers can see is to the left where traffic is coming from and to the right where they have to go.

“I supposed on the east side they could put a bunch of trees that go with the Kus-kus sum wildlife reclamation and I don’t know, on the other side maybe put a statue of the mayor that solves the traffic problem.”

He added that one of his main goals is to simply get a discussion going.

“There’s no harm in getting the discussion going. To (Wells’) credit, he told me that they had already talked about it,” Gravell said.

“I certainly would in no way profit from them building traffic circles. I have a small janitorial business, and the only thing I know is maybe cleaning up a mess, and this is a bit of a mess.”

Gravell said he does not believe it would be difficult to build the roundabouts.

“On the town side, there’s a fair bit of room, and most of the new construction is off of the main road. They could build the traffic circle on the inside corners of the intersections and let traffic flow through normally. Then after they’d gotten things ready, quickly patch it up and people could begin using it,” he said.

“The east side is not that hard to build either. (It’s just) some interlocking blocks and more fill that has to be dumped in…that’s a big pad that they built there in the first place…it’s just adding some more dirt to what’s already there.”

Gravell said his research has shown that building a traffic circle costs about $1-million or less, as compared to a new bridge, which would cost $20 to $50 million.

“I hope the idea gets considered on its own merit, and not because some uninitiated person has suggested it,” he said.

“The idea is to keep the traffic moving, and as long as it’s steadily moving, nobody’s gonna get that heated up about it, and all the emergency vehicles can either make their way through or the traffic that’s there can, while it’s moving, have a place to get off. Once it’s all stopped, then it’s gridlocked.”

In light of the situation, Gravell had high praise for Courtenay’s newly elected council.

“I think Courtenay has elected itself a great town council, and I truly believe they’re all committed to working towards the city’s needs,” he said.

“Another thing I should add is this is primarily Comox’s responsibility too. If Courtenay wanted to build something like this, it might be a good idea for Comox to kick in a little bit of money because half of that traffic is coming from Comox.”

Mayor Wells told MyComoxValleyNow.com that the city’s Master Transportation Plan does include the idea of traffic circles.

He said that in future, staff would discuss the pros and cons of building roundabouts in the area of the 17th Street Bridge.