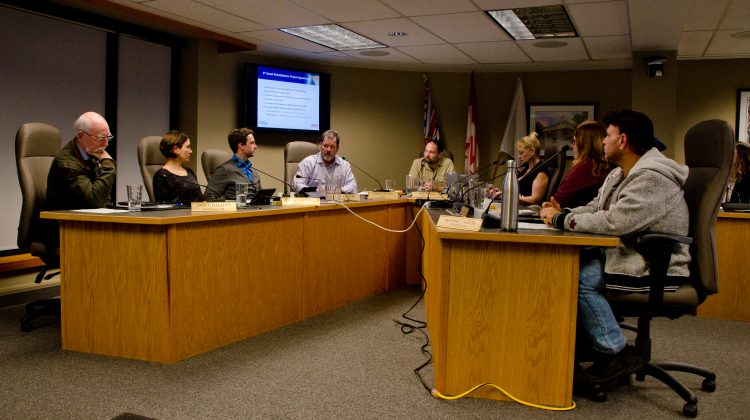 Courtenay city council are pictured during the committee of the whole meeting on November 26th, 2018. Photo by James Wood/98.9 The Goat/Vista Radio

On Monday evening, Courtenay city council were presented with an update on the ongoing work to renovate the 5th Street Bridge, one of three major river crossings in the Comox Valley.

The presentation was handled by John Steiner from Urban Systems, the company that’s already working on the city’s master transportation plan. 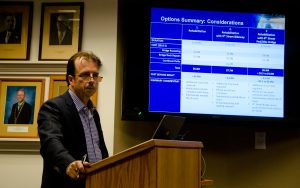 John Steiner of Urban Systems is pictured during Courtenay’s committee of the whole meeting on November 26th, 2018. Photo by James Wood/98.9 The Goat/Vista Radio

The bridge has been slated for major reworking for multiple years, including a complete repainting of the bridge, removal of existing lead paint, repairs to structural steel and handrails, and the re-surfacing of the bridge deck.

First built in 1960, the bridge has already been resurfaced and received seismic upgrades. The last major work was in 2012, and at the time, it was found that more rehabilitation is needed to address corrosion.

However, the price tag for that work, and its possible scope, has expanded dramatically.

Due to increases in anticipated costs, the bridge renovation is now expected to cost $3.4 million more than what was previously laid out in grants.

The work, if set in motion by council could completely shut down the bridge for five months, or six months if traffic is allowed through in alternating lanes.

Two more options were also laid out for council consideration. The first would take the bridge’s current cantilevers (sidewalk attachments) and remove them, replacing them with wider paths to allow cyclists more space on the route.

That option would take eight months of work, and is estimated to cost $7.7 million.

The second was the planned renovation of the bridge, with construction of a pedestrian/cyclist bridge at 6th Street on a later date. That was projected to cost close to $10.3 million, with six months of work.

The presentation of these options came as a major shock for council. Mixed in with that shock was near-anger from councillor Manno Theos, while councillor Doug Hillian asked about the possibility of simply removing the bridge and building a new one.

Theos mentioned his own history with the bridge work while in discussion with Steiner, expressing frustration with the timeline of the project and asking why the city had waited to get the work done, allowing inflation to increase the cost. He was also concerned about what he saw as an expansion in the scope of the bridgework, given the two other options raised by Steiner’s presentation. 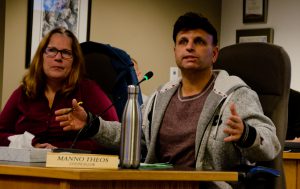 Courtenay city councillor Manno Theos speaks during the committee of the whole meeting on November 26th, 2018. Photo by James Wood/98.9 The Goat/Vista Radio

“Why, all of a sudden, have we changed directions here and added all this extra, extra, extra,” said Theos, speaking to Steiner.

Steiner couldn’t speak to why it had taken the city up to this point to get the bridge work underway, but he did indicate to Theos that the base work of the rehabilitation hadn’t changed, only its cost due to inflation.

Further discussion between Steiner and council indicated that a traffic management plan for any bridge repair work has not yet been developed. City staff also stated that the master plans for the city’s parks and transportation systems could help to secure more grants.

Eventually, council voted without opposition to receive Steiner’s report. After the vote, Mayor Bob Wells stated that the bridge issue was “obviously going to take us a little bit of time to digest.”

“At the end of the day, this is a critical piece of infrastructure,” said Wells.

“Obviously, it’s the main corridor to the downtown of Courtenay, so you know we’re going to moving forward in some way, it’s just really now looking at do we really just focus on getting the bridge repaired in the most cost-effective way, or do we look for doing those enhanced things, like doing pedestrian bridges, that kind of stuff.”

He believed that the bridge options will come up in the city’s 2019 budget discussions, with the city possibly undertaking a referendum or alternative approval process on the question of borrowing funds.

As for his thoughts on the possible bridge upgrade or a bridge at 6th Street, which was shot down by council in previous years, Wells was optimistic.

“I think the reason we put forward the cantilevering, we asked for that option, is it seemed like it might be a less expensive option, and we were doing the works on 5th Street anyway,” said Wells.

“I think there is a real motivation to get a better cycling infrastructure or walking infrastructure, and so if we can that as cost-effectively as possible, that’s what we’re looking to do. But like I said, we’re still in a little bit of sticker shock here. We’re sort of expecting something is going to be three million dollars, now we’re over six million dollars, and that’s without the cantilevering. The cantilevering part of it, that seems to be a little bit more expensive than it was, but not nearly as much as that base cost.”

He stated the last time council saw prices on the bridgework was a “couple years ago”, and believed a referendum had a good chance of happening.

“We’ll go through it through the budgeting process, we’ll see if there’s some beans in the jeans that we’re not aware of. I think with something this expensive, there is a good chance that might happen, but I think time is going to tell.” 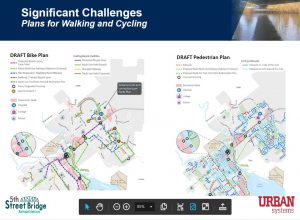