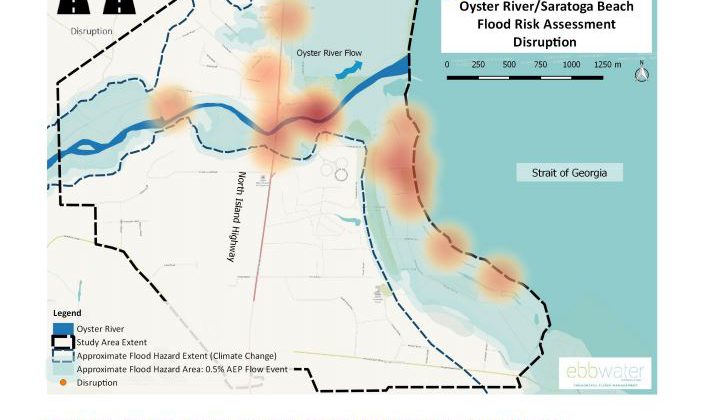 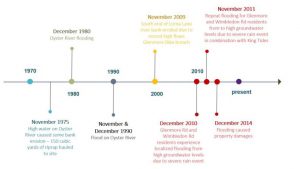 According to an Ebbwater Consulting report, the CVRD and SRD were successful applicants to the Natural Disaster Mitigation Program (NDMP) and have embarked on a Stream 1 Risk Assessment Project.

This will allow the two districts to access additional flood mitigation and adaptation funds and can also serve as a stepping stone for the community to develop future flood mitigation plans.

The primary objective of the current project is to better understand the present-day flood risk in the community.

“This will help to inform future flood mitigation efforts, including policy and emergency planning,” the report read.

“It will also be used to inform the public and other stakeholders of the present-day and future risk from riverine and coastal flooding.” 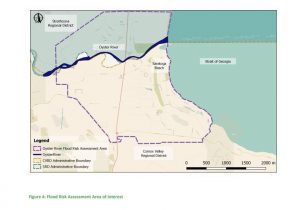 The report noted that it is “clear from the above analysis that affected people and economic damage risk is significant in both the present-day and in the future with climate change. Disruption is also relatively significant. In summary, there is a significant flood risk in the region. Risk reduction should be a priority for the CVRD and the SRD, as well as for Provincial authorities.” 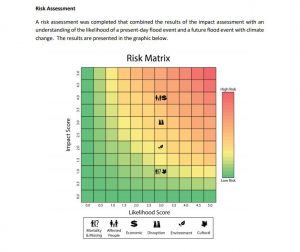 In the event of a flood disaster, disruption would occur throughout the community.

According to the report, “Some hotspots for effects include areas along the coast, the bridge crossings, and drinking water facilities. There are some wells within the flood hazard area limits. Should a flood occur, contaminated water (from overland sources) might enter the well heads.”

A secondary objective is to position the CVRD and SRD to be able to capitalize on future funding programs through the completion of a Risk Assessment Information Template (RAIT).

According to the report, “a completed RAIT, or a variation of it, is a required component of federal (NDMP) and provincial (Community Emergency Preparedness Fund, CEPF) funding programs. These programs can provide support for flood science, flood planning, and both structural and non-structural flood mitigation.”

“We’ve done stream one, that’s our flood risk assessment. The next piece is flood mapping. So we’ve applied for funding just in August of this year for flood mapping of the study area that we did, plus the entire coastline for the CVRD.”

The CVRD is waiting for a decision for approval of the grant application, which will likely come in spring 2019.

“If the grant comes forward, then we’ll proceed with that sometime in late 2019,” noted CVRD general manager planning and development services Scott Smith. “If the grant doesn’t come through then we’d have to revise where we would go from here.”

The open house presented the results of a flood risk assessment that was completed earlier in the year by Ebbwater Consulting, regarding the flood risk in the Oyster River area.

“The purpose of the open house was two-fold. It was to share information that we received from a flood risk assessment that we had contracted for,” Doerksen said. “We started that in 2016 and just received a report in March of 2018. That was for the Oyster River.”

And at a workshop in January 2018, residents and stakeholders from the Oyster River area asked that the CVRD share the information from that completed report, “and that was the primary reason why we were doing the presentation,” Doerksen said.

As well, the CVRD combined with the SRD for two presentations this month. The first came on Nov. 13 to the the Saratoga and Miracle Beach Residents’ Association (SAMBRA) and the one on Nov. 22 which was open to all interested residents and stakeholders from Area C and Area D.

So how big is the flood risk in the Oyster River area?

“It really depends on the event that hits, and what all the factors involved (are) when it does hit,” Doerksen said.

“One thing we’re looking at with this study is, we’ve asked our contractor to not just look at the flows in the river which is all the data that we’ve had in the past, but also look at climate change and storm surge combined, which then resulted in a larger flood plain. It would have to be a pretty serious event for something like that to happen.”