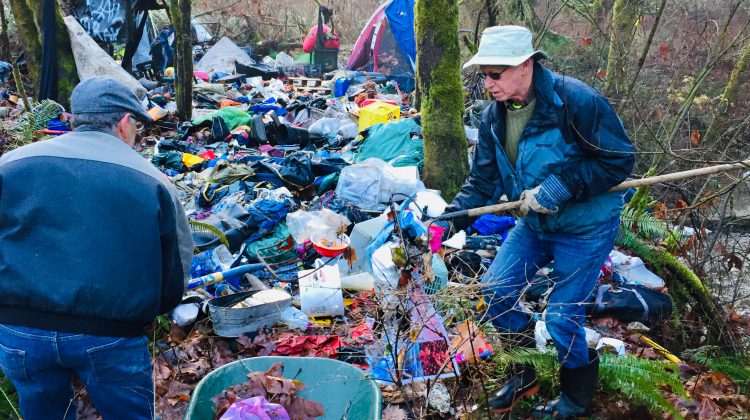 On Wednesday morning, volunteers including Millard Piercy Watershed Stewards president Robin Harrison picked up garbage that had accumulated above the banks of the Piercy River. Photo by Troy Landreville/98.9 The Goat/Vista Radio

COURTENAY, B.C. – Be careful of needles.

That was a key piece of advice that Millard Piercy Watershed Stewards president Robin Harrison offered to volunteers who ventured to the banks of Piercy Creek, to clean up the mounds of garbage that have accumulated next to a homeless camp in the area.

Throughout the morning, 12 volunteers participated in a ‘cleanup party’ to pick up the mess.

According to the Stewards, who organized the cleanup, some of the garbage had entered the creek and presented a hazard to the health of the stream and, eventually, the estuary.

At roughly 8:45 a.m., City of Courtenay workers dropped off supplies including wheelbarrows, tongs, gloves, and tubes to collect syringes (the area is on private land so city staff don’t have the authority to clean the garbage up, noted the Stewards).

The volunteers then carried wheelbarrows across a spongey, water-soaked field towards the bushes and the creek. It didn’t take long for them to come across a single tent, and in front of it, a floor of garbage. 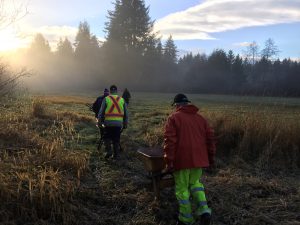 Volunteers taking part in Wednesday’s ‘cleanup party’ made their way across an open field in Courtenay, towards the Piercy River.
Photo by Troy Landreville/98.9 The Goat/Vista Radio

Harrison said the group was first made aware of the mess a month or so ago.

“One of our volunteers noticed it, and alerted me,” he said. “We were wondering how we can approach this and try to get rid of (the garbage). So we’ve made an arrangement with the city to take away the garbage, so we’ll haul it out to the end of the road here.”

According to Harrison, the landowner lives in Metro Vancouver, however the owner’s mother owns a property off Fraser Road that abuts onto the area.

“We have talked to her and she is aware of the situation here,” Harrison added.

And Harrison noted that the situation is “quite bad.”

“There have been problems over the years,” he said. “The property was sold about a year-and-a-half or so ago. I was actually one of the previous owners. There was a group of us who owned it. Periodically over the years there would be homeless people that would come in there and some of them, when they left, left quite a mess behind.”

The garbage potentially poses a real threat to the health of the stream, home to Coho salmon, and the occasional mink, otters, and bears.

“There is leaching of the materials… we don’t know what is there, actually, so that is a potential problem,” Harrison said.

The Millard Piercy Watershed is located on the outskirts of and encompasses 13 square kilometers with roughly 55 kilometers of watercourses, including ditches.

The two main watercourses: Millard and Piercy Creeks, originate in wetlands and in underground springs.