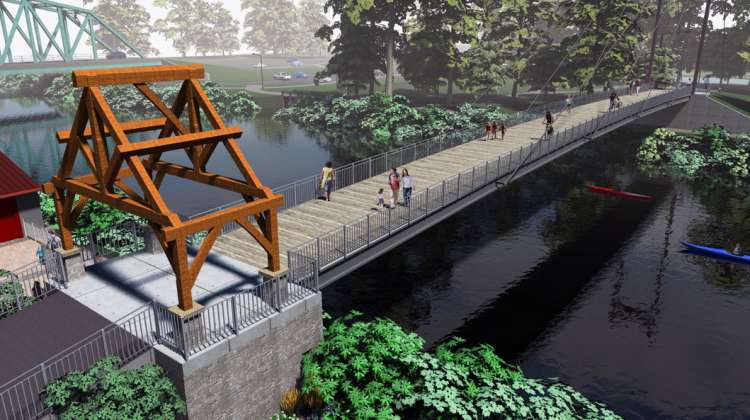 A draft image of the 6th Street Bridge project.

COURTENAY, B.C- At least one resident of the Valley is excited by the bridge question facing Courtenay.

Earlier this week, Courtenay city council were presented with three options on what to do with the 5th Street Bridge. The bridge is in need of regular maintenance work, the cost of which has now escalated beyond what the city originally planned.

The first option the city has is to approve that regular maintenance. The second would take the bridge’s current cantilevers (sidewalk attachments) and remove them, replacing them with wider paths to allow cyclists more space on the route, while carrying out that maintenance work.

It would take eight months of work, and is estimated to cost $7.7 million.

The third was the planned renovation of the bridge, with construction of a pedestrian/cyclist bridge at 6th Street on a later date. That was projected to cost close to $10.3 million, with six months of work.

No matter which option is chosen, the bridge will be either fully or partially closed while the work is carried out.

While that news stunned council, and has had a less than positive impression on other Valley residents, Comox civil engineer Tim O’Brien is feeling excited. O’Brien was part of a committee leading the push for Courtenay to build a pedestrian/cyclist bridge at 6th Street, which would connect to Simms Park.

O’Brien had been hired on by the group to work on the planning of the bridge, and joined the committee once that work was finished.

Reached for comment on Thursday, O’Brien believed the crossing would be a “great project” for the city.

“If the 5th Street Bridge had to be removed or replaced, and it wasn’t possible to upgrade it with bike lanes, then the 6th Street Bridge would become critical,” said O’Brien.

“Right now, it is critical to have some kind of crossing for cyclists and pedestrians. The river is such an important amenity to the City of Courtenay, yet it’s not weaved within the urban fabric. The city could become a much more vibrant place, with something like the 6th Street Bridge crossing it and connecting the Lewis Centre and all the various parks on the other side, to the downtown.”

According to the city, there hasn’t been any action on the bridge proposal since 2015, when a motion raised by Councillor Doug Hillian and passed by council declared “support in principle” for the project. Prior to that vote, a funding application to the federal Gas Tax Program for the project was unsuccessful.

O’Brien stated that there had been a report on the project that could be updated and presented to the new council, and indicated the committee had gone into a “holding pattern” until the latest election, with a plan to possibly “re-activate” after the vote had finished.

“In a way, the river cuts the downtown off from parks, so the other side of the river needs to be connected to the downtown,” said O’Brien.

The city’s draft master transportation plan will also be coming forward on December 17th, and more discussion will likely be had on the proposal at that time.

“It’ll be one of the best things to happen to Courtenay in a long time, I think,” said O’Brien.