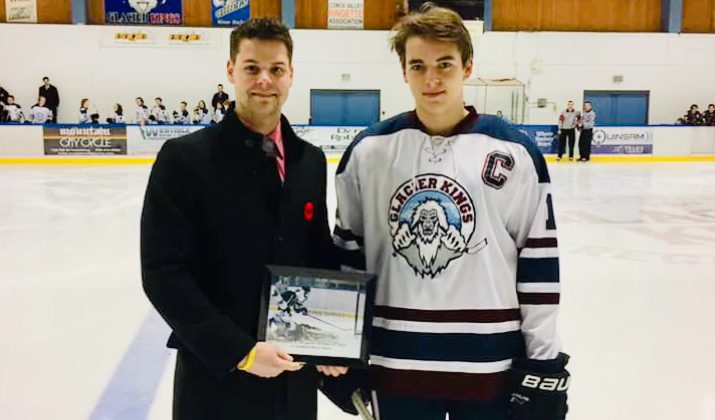 COURTENAY, B.C. – To say the least, losing their captain and leading scorer Finn Withey was bittersweet for the Comox Valley Glacier Kings.

The 19-year-old winger has graduated to the junior A ranks, and will be a member of the Canmore Eagles of the Alberta Junior Hockey League for the rest of the season.

The six-foot tall, left-shooting Withey leads the Glacier Kings with 16 goals and 27 points.

Both his goals and points totals are more than double that of the team’s second leading scorer, Damian Rennie (seven goals, 14 points).

Prior to this season, the Whistler native split time between the Victoria Grizzlies of the British Columbia Hockey League and Comox Valley. 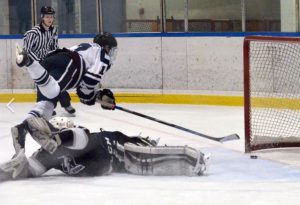 Losing Withey is a tough blow for a Glacier Kings squad that is in the basement of the Vancouver Island Junior Hockey League’s North Division with a 3-22-1-1 record.

“It’s bittersweet,” Glacier Kings head coach Jordan Kamprath said. “Our goal in junior B is to move players up to the next level. I’ll gladly take a hit on the season if it means a player gets an opportunity for a scholarship or anything like that.”

He later added, “He was a very dominant player out on the ice so it’ll be a tough loss without him, but it will be a good opportunity for him,  and some other (Glacier Kings) players are going to have to step up, for sure.”

Kamprath said Withey “didn’t deserve to be in junior B.”

“He should have been up there (playing junior A) in the first place,” Kamprath said. “It was a good opportunity for him to go and I definitely pushed it as hard as I could.”

Withey’s leadership and skills on the ice bodes well for his hockey future, according to Kamprath: “I think he has an opportunity to go down to the States and possibly play in the college leagues.”

Meanwhile, Eagles head coach and general manager Andrew Milne couldn’t be more thrilled with the new addition, as Withey joins one of his best childhood friends on the Eagles’ squad.

“Inserting Finn into our lineup is certainly going to strengthen our forward depth. All of our scouting reports indicate that Finn plays a responsible two-way game and has a nose for the net,” Milne said. “He is an experienced player who has played in the BCHL playoffs. We fully expect Finn to fit into our offensive attack.”

Withey is expected to wear No. 17 with the Eagles and joins recently acquired defenceman Brent Schuldhaus.

With Withey out of the lineup, the Glacier Kings lost a couple of close games over the weekend.

On Saturday, they dropped a 4-3 decision to the visiting Westshore Wolves at the Comox Valley Sports Centre and on Sunday afternoon, the Glacier Kings travelled to Parksville, where they were edged 3-1 by the Oceanside Generals.

The Glacier Kings are back in action on Thursday when they travel to Nanaimo to play the Buccaneers.