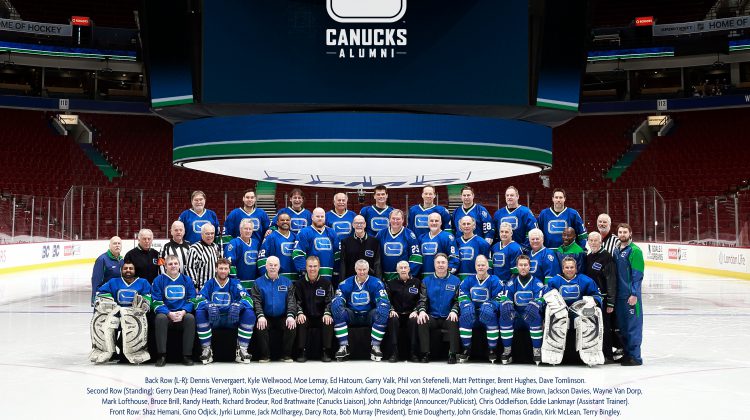 COURTENAY, B.C. – The Vancouver Canucks are coming to town early in the new year.

And while it’s technically the Canucks alumni, seeing the former NHLers in action on Jan. 18 will be a trip down memory lane for those who cheered on the players who wore the Vancouver jersey over the years.

The Vancouver Canucks Alumni and Friends are in the Comox Valley and will be skating in the Mayors Cup in support of Comox Valley KidSport.

Proceeds from the annual Mayors Cup fundraiser featuring the alumni, local politicians and business leaders go to KidSport, a not-for-profit organization that helps kids who cannot play sports due to financial barriers.

“It really exemplifies the fact that the players that play in the hockey game are doing it for fun, and by helping kids pay for their registration, they have fun, too. It’s a great thing and it’s a way that sport brings people together.”

KidSport helps between 100 and 125 young athletes across the Comox Valley each year.

Pantuso noted that KidSport allows children under the age of 18 to register for sports that they may not be able to afford to take part in. Families apply online for funding, so their child can play any of the sports under the Sport BC umbrella.

“Some of the letters we get back are so heartwarming,” Pantuso said. “It’ll be from someone we’ve helped register for a sport, and the letter will just say ‘I didn’t get a goal or an assist all year but I made some friends,’ or ‘I learned to show up every day on time.’ It is a great thing.”

One of the largest and most active alumni groups in the NHL Alumni Association, the Canucks Alumni is made up of former hockey players, coaches and administrators and has more than 125 members living in B.C.

Just which alumni members will be playing in the valley that night will be announced in mid-December.

This isn’t the first time an NHL alumni team has played on valley ice. The Montreal Canadiens were in town five years ago for the cup.

“This is the first time the Canucks have been here,” Pantuso said.

Tickets will be available at the door.