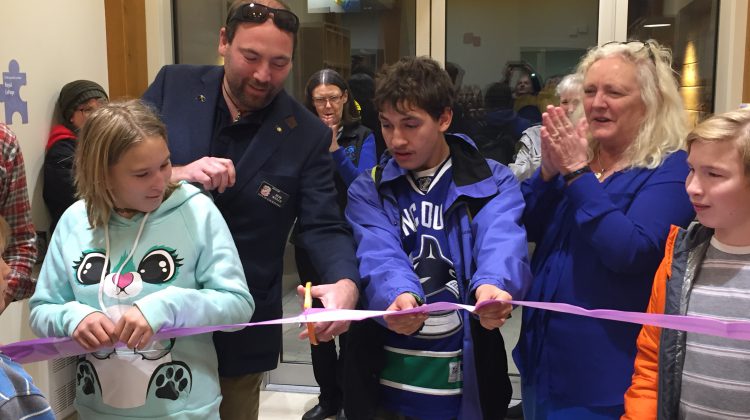 The ribbon for the newly-renovated centre is cut by Courtenay mayor Bob Wells with Joanne Schroeder on the right. Photo by Troy Landreville/98.9 The Goat/Vista Radio

The 2,000 square foot centre is part of The Autism Program (TAP) run by the Comox Valley Child Development Association (CVCDA), and renovations had been underway for the past few years.

The new space will be much bigger, brighter, and is specifically designed for children with autism. Schroeder believed it will give the program a “whole new lease on life”.

“We’ve had unbelievably generous support from so many people, businesses, in the community,” said Schroeder.

“Inside, we’ve tried to acknowledge lots of those people and I won’t try to do it now. We’ve had a lot of support from private donors, business donors, and we’ve also received some money from the provincial government.” 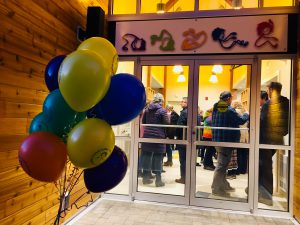 Balloons outside the centre’s grand opening on December 5th, 2018. Photo by Troy Landreville/98.9 The Goat/Vista Radio

There are roughly 40 children and youth in TAP.

There are also children on the spectrum who are accessing speech and occupational therapy through the CVCDA’s supportive child development program.

The renovated centre now includes a small gym, space for social groups, an individual intervention room, and a kitchen and laundry to help older kids learn independent life skills that they can apply in the future.

The association at 237-3rd St. received a big boost by the CVCDA’s 43rd annual telethon which raised $117,719, earmarked for furnishings and final touches at the centre. The province also contributed $250,000.

The association will start running programs in the building in January 2019.

Nearly 200 children and youth in the Comox Valley have been diagnosed with Autism. Autism, or Autism Spectrum Disorder (ASD) is a disorder that affects the brain’s normal development, impacting on social and communication skills, as well as behaviour.

Currently one in approximately 68 children in B.C. are diagnosed with ASD. This is over a 300 percent increase in the last decade.