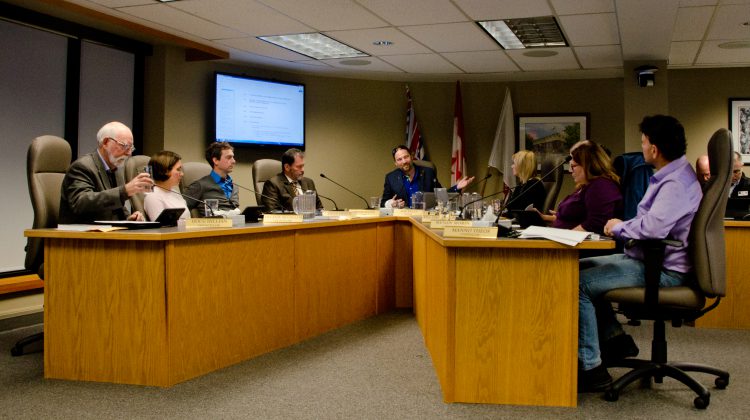 Courtenay city council are pictured during their meeting on December 3rd, 2018. Photo by James Wood/98.9 The Goat/Vista Radio

COURTENAY, B.C- A question on whether or not to allow bottling water has been posed to the City of Courtenay.

On Monday evening, city council were presented to by Bruce Gibbons, the founder of Merville Water Guardians and a prominent local activist against water bottling in the Comox Valley. 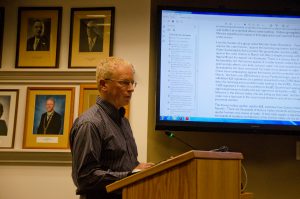 Bruce Gibbons is pictured during his presentation to Courtenay city council on December 3rd, 2018. Photo by James Wood/98.9 The Goat/Vista Radio

Gibbons asked council to take a series of steps against the practice of water bottling and sale, citing the recent events at the Comox Valley Regional District after a resident of Merville sought permission to bottle water on their property.

His requests included the prohibition of water bottling in any of the city’s zoning, support from the city government for the Strathcona Regional District’s resolution to ask the province to “curtail” commercial extraction of groundwater for bottling or bulk sale, and for the city to take steps to be deemed a “Blue Community” by the Council of Canadians.

Those steps would include the recognition of water as a human right, the promotion of publicly owned, financed, and operated water/wastewater services, and bottled water sales being banned at events held by the City of Courtenay and public facilities.

“We will continue to do our part to fight the Provincial Government, who have jurisdiction over Groundwater licencing, and to support the Strathcona resolution to curtail groundwater extraction for bottling or bulk sales,” read part of Gibbons’ presentation.

“We would sincerely appreciate the support of the City of Courtenay in protecting  the above ground uses of our groundwater by preventing anyone from bottling and selling water from the Comox Valley aquifer or any other aquifer in BC.”

Council members did not reject the idea, though there were questions raised about the ban on bottled water sales in public facilities and City events. There was also discussion about how a ban on bottled water production could work in the event of boil water notices, which have occurred in the Valley in the past.

Gibbons indicated that there were exceptions for the asks, such as the issuing of a boil water notice. He also informed council that the three propositions for the “Blue Community” designation were brought by him on behalf of the Council of Canadians, and separate from his desire for a ban on extraction and bottling of groundwater.

After the meeting, Mayor Bob Wells indicated that the proposition from Gibbons will likely come back to council in the future, likely through a motion by a council member or a report from city staff asked for by council.

“I think that there is a lot of public backlash right now on bottling water,” said Wells.

“Public sentiment right now seems to be “we’re going through droughts, we have a very uncertain future climate wise, and all points right now, it’s going to get drier in the summer.” Just looking at the science, there is a lot, using that precautionary principle, I think that that’s probably the way we would go.

“When you don’t know what your water is going to be like, and you’re trying to make sure that you’re providing it for all the citizens in your community, you don’t want to have a bunch of your water that is going to be sold, and you don’t necessarily know what that outcome is going to be. This is potentially that thin edge of the wedge, when maybe they’ve got great intentions, they’re going to sell that water locally, but once that’s approved, then other things can come down the road.”