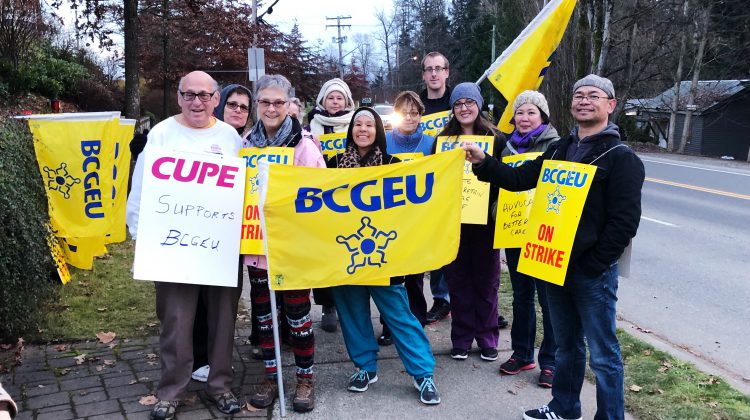 Picketers stand for a group photo on the afternoon of December 7th, 2018. Photo by James Wood/98.9 The Goat/Vista Radio

COURTENAY, B.C- Seniors care workers on strike in Courtenay had to deal with a series of threats this week.

The workers are part of the BC Government and Service Employees’ Union (BCGEU), and work at Caso Loma Senior’s Village and Comox Valley Senior’s Village. They’re on the picket lines for better wages and improved worker recruitment.

According to BCGEU staff representative Doreen Smith, the line began falling apart a few days ago due to residents of the Valley who didn’t appreciate drivers passing by the line honking their horns in support.

Smith indicated that during the week, picketer’s signs were stolen, and later found covered in gasoline. However, they were not burnt, and recovered by the strikers.

The following day, workers on the picket line reported objects being thrown at them that resembled hot-dog forks, or homemade arrows. The incidents culminated in the arrests of two young boys, after workers reported a gun being pointed at them.

Police confiscated a pellet gun, according to Smith.

The line has now resumed, with an evening line getting in place and plans for a night line.

“Nobody has ever heard of anything such as this happening,” said Smith.

“So it is an abnormal kind of situation, I’m not sure how it started, but it’s been dealt with at this point. Hopefully, not again.”

She stated the horn honking is in support of the workers.

“There are elderly people within the residence, and they’re not complaining, which is really close to the street. So, I’m not sure why that is bothering. We haven’t been out here at night time, and there isn’t enough traffic for a lot of honking in the evening, so it’s the daytime when you get most of the honking.”

As for the progress on a deal with their employer, Smith indicated that a meeting could be coming next week, with a tentative date set for December 13th.

“If the employer has a deal to offer us, then they should bring it forward at any time, because maybe it’s an acceptable package that we won’t need the labour board other than their endorsement at the end of the day, so I’m trying to make that happen,” said Smith.

The strike will continue until a deal is in place. Workers on the line are being paid while they provide essential services, and for their time on the line by the union.

“It is not a lot of money, but there is a small amount of funds that will help them to at least be able to feed their families,” said Smith.

“Not necessarily pay the rent, but survive.”

She also thanked local teachers and United Food and Commercial Workers International Union members who had come and shown their support, while offering a message to the Comox Valley as a whole.

“The workers are out here trying to improve seniors care,” said Smith.

“Without better wages, they have a hard time recruiting enough people to take care of the residents that are inside.”