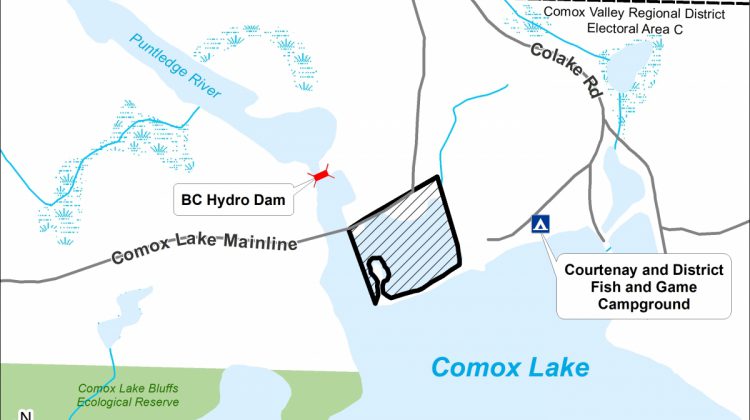 The property is highlighted on a supplied image.

COURTENAY, B.C- A land swap near Comox Lake will be giving a proposed hatchery a leg up.

According to a news release from the Comox Valley Regional District (CVRD), an agreement has been reached with the Courtenay and District Fish & Game Protective Association for a key piece of land and right of ways for infrastructure of the new Comox Valley Water Treatment Project.

The district will be providing the raw water needed for the association’s proposed hatchery project in exchange.

“This agreement is a win-win for the community, enabling construction of key infrastructure for the project while providing the Fish & Game Association with the means to move its environmentally significant hatchery project forward.”

According to Wayne White, the chairman of the Conservation Committee for Courtenay and District Fish and Game Protective Association, there are plans to produce 100,000 Coho from the planned hatchery.

Construction of the hatchery will depend on the provision of the raw water, which will require the completion of the water treatment project, slated for 2021. Planning is underway for the facility, with fish going towards the Puntledge and Trent Rivers for sports fishing opportunities.

The access to the cool water from the depths of Comox Lake was described as “crucial”.

The agreement between Fish and Game and the CVRD provides a location for the raw water pump station, marine pipeline, and raw water pipeline for the Valley’s new water system.

“In lieu of receiving money for the property and rights-of-way, the Fish & Game Association will receive raw water from the pump station for their proposed hatchery project and fire protection system, as well as an emergency access point to their campground and boat launch area,” read the release.

The rough estimated value of the transaction was around $300,000, according to Charlie Gore, the districts manager of capital projects.

The release also stated that the Fish and Game association has been a long-term partner on the treatment project, hosting water-testing equipment for over eight years. The district was pleased to continue the partnership with the provision of raw water.

“After 20 years, the Fish & Game Association will assume responsibility for the cost of raw water and any maintenance or replacement of infrastructure required to supply the hatchery and fire hydrants with water,” read the release.

“The CVRD Water Committee approved the agreement in principle in July 2018. The necessary legal agreement is now executed, which allows the CVRD to complete the necessary surveys to officially transfer the parcel of land and register the rights-of-ways.”