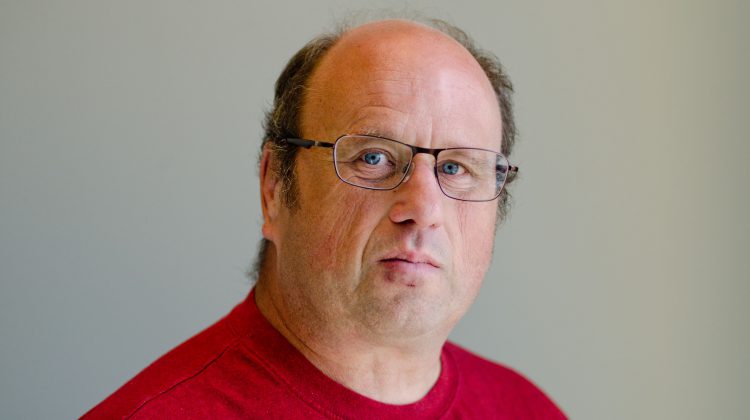 Jo-Ann Latta said it looked like it had been dragged along the path, and left abandoned on the trail between Highway 19 and the Gold River Highway (Hwy 28).

Unfortunately, this isn’t that unusual of an occurrence, according to the head of Stop Comox Valley Illegal Dumping, Jamie Barth.

“It’s a common dumping spot between Highway 19 and (Highway) 28. We’ve found lots of stuff there in the past. Recently, I pulled out approximately 250 kilograms of assorted items, that was about two weeks ago,” Barth said. 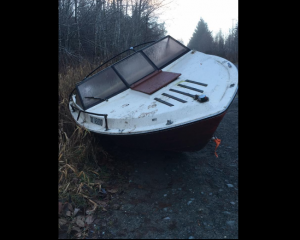 He noted that the group has found things like construction materials (drywall, two-by-fours) and even household furniture like sofas.

Barth explained that illegal dumping might just be a cost-saving method for some.

“Something like the couch or the sofa are difficult because they’re cloth material, and a lot of (recycling) places right now won’t take them,” he said.

“It’s also a perception of the cost of what it would be if it landed up at the landfill. Something like that (a sofa) would cost you fifteen to twenty dollars.”

Barth said this year; the group has taken “18,835 kilograms out of the environment” in the Comox Valley and surrounding areas.

“We’ve volunteered approximately 300 labour hours to pull stuff out of the back roads from Cook Creek to that area in question (where the boat was found),” he said.

Barth explained that the group receives tips off of Facebook, and from emails to be made aware of a spot that needs a clean up.

“(Another) thing that I’ll do is if the weather is decent, I’ll go out on a weekend and check out the usual sites. Kind of like somebody setting their trap lines (for hunting). I’ll check the cameras, check the sites and see what’s going on,” he said.

Barth added that the abandoned boat discovered Monday has been reported to the City of Campbell River’s bylaw officials.

“It gets reported to bylaw, and bylaw will make a determination of location and property ownership, and then make a decision from that point on the cleanup that’s going to occur on that,” he said.

“We can’t just go on to somebody’s property and decide we’re going to clean it up because it’s the good thing to do. We need to have clearance to do that type of thing.”

Barth said usually, if he finds something that he wants to clean up. He’ll locate it and mark down its coordinates, and send that location in to bylaw officials or the appropriate governing body in the area.

“Something like a logging road situation, I would likely get approval to go pick that up,” he said.

Barth noted that he uses his own pick-up truck, as well as a ten-foot dump trailer when he conducts a clean up.

He said once the item is picked up, it’s brought over to a proper recycling/garbage facility or a landfill.

“It is important in today’s society that yes, we are going to report stuff on social media, bring awareness to that, but it’s also important to tell the authorities…call bylaw officers, give one of my type of volunteer organizations that something’s out there, if you’re not willing to get a hold of the government,” he said.

“We’ll go take a look at that, forward that tip as anonymous if that’s what you want, and then we’ll move forward from there.”

Barth noted that his goal is to keep these sites clean, and report illegal dumpers.

“I want those back roads and by-ways to be left open. If it continues to be a nuisance and an illegal dumping area, I’m just afraid that these companies are going to gate these roads, and that’s the last thing any one of us want to see happen,” he said.

“I wanna go up on a sunny day, and go check out these back roads.”

Barth added that he “appreciates everybody’s efforts in going out and cleaning stuff up”.

“The last cleanup, the group (the Millard-Piercy Watershed Stewards) that did behind Walmart (in Courtenay), that’s fantastic to see that that’s getting cleaned up. That’s really great,” Barth said.

More about Stop Comox Valley Illegal Dumping can be found through Facebook.