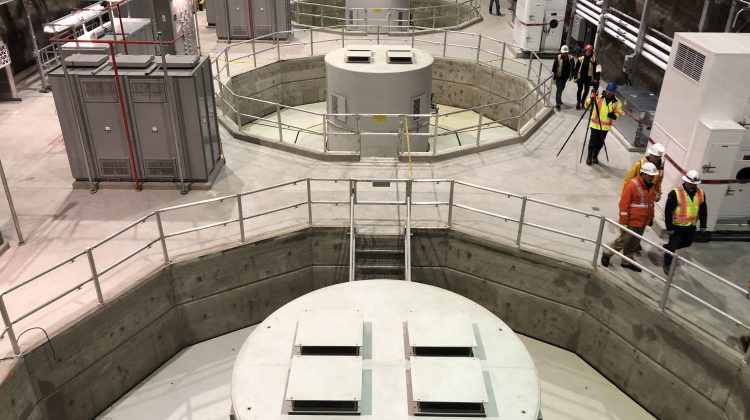 The turbines inside the new underground powerhouse. Photo by Twila Amato/99.7 2Day FM.

Today marked a celebration of the new station, which highlighted the facility’s improved seismic safety and reliability, as well as its capacity to better protect downstream fish habitat.

B.C. Hydro’s president and chief operating officer Chris O’Riley said he is proud of the project and the people involved.

“It’s fantastic. What we’ve done here with our contractors and team is create a great achievement with the brand new powerhouse, replacing the 71-year-old former plant. We’ve got a plant here for the ages, that will be safer, more reliable in terms of protecting the downstream fish habitat,” said O’Riley.

He added that there have been numerous benefits not just for B.C. Hydro, but for the local community’s economy as well as Campbell River’s First Nations.

O’Riley said another thing to celebrate is the “tremendous” safety record while construction was going on. According to him, there were no reported injuries and no time lost, which he said was impressive given the size of the project.

Chief Brian Assu of the We Wai Kai First Nation and Chief Chris Roberts of the Wei Wai Kum First Nation were also present. Both chiefs commended B.C. Hydro for the way consultation was handled and how relationships were renewed.

“Our people have been here from the very beginning, the very beginning of when this structure was first put in place. In those days, there was no effort of consultation and engagement on concerns or how this might impact a place that we call home,” said Chief Roberts.

“I’m very pleased to see that it’s an improvement standpoint, not just replacing what was there.”

The John Hart Generating Station Replacement project began construction in 2014. Work on decommissioning and removing the old facility will run until summer 2019.

The new facility generates 10% more power than the old station with the same amount of water. A new feature is the water bypass facility within the powerhouse, which regulates water flow so downstream fish habitat remain undisturbed.