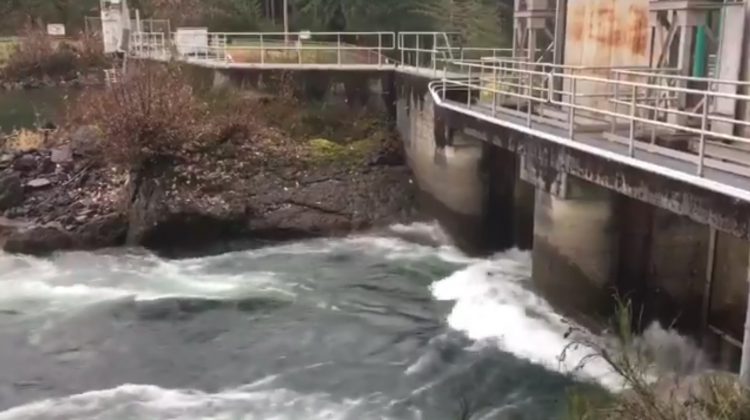 A photo of the dam release flow on Friday, December 14th. Image sourced from https://twitter.com/SWatson_BCH.

COURTENAY, B.C- Residents of the Comox Valley should continue to stay away from the Puntledge River this week.

According to the latest bulletin from BC Hydro, the power authourity will be continuing to spill the maximum amount of water into the river from Comox Lake into Tuesday.

“We will start reducing the spill tomorrow to perhaps 120 m3/s other than for four hours during the daily high tide,” said spokesperson Stephen Watson, in the bulletin.

“The water release is expected to be lowered further through the week as the inflows recede. We will adjust operations accordingly should it be drier or wetter than forecast.”

According to Watson, the weekend storms brought less water than expected, which was good news.

“While there is of course some uncertainly with the two storms through this Thursday, it looks better in terms of flood risk management and being able to hold water back during the high tides,” said Watson.

The flows of the Puntledge will continue to be high and dangerous, and the public is advised to stay away from the river this week. The lake’s current level is at 134.3 metres, and dropping, after hitting a level of 134.8 on Saturday.

“At this time, we continue to see low risk of isolated downstream flooding,” said Watson.

“If all goes well, we will end the extra water release from Comox dam on the weekend when the King Tides are set to begin and last through the rest of December. Good timing.”