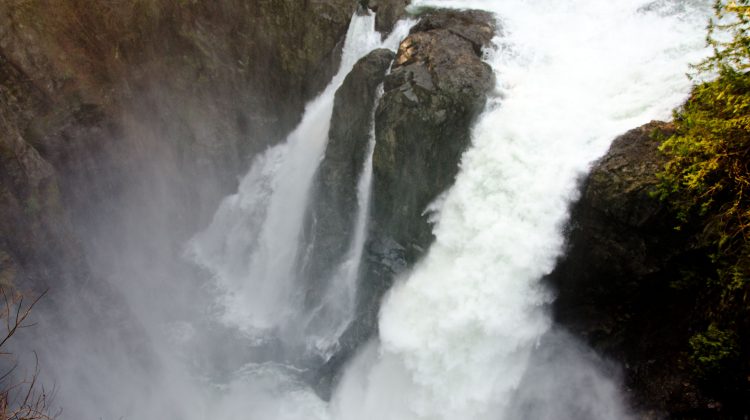 CAMPBELL RIVER, B.C. – With a series of windstorms and heavy rain slamming into Northern Vancouver Island, BC Hydro is advising people to steer clear of the edges of Elk Falls.

“We continue to ask the public to stay away from the upstream side of Elk Falls through the week given the high flows,” said BC Hydro spokesperson Stephen Watson.

“Elk Falls with the higher flow rate can be safely seen from the Elk Falls suspension bridge.”

On the bright side, BC Hydro, which owns the John Hart Generating Station next to the park, noted that the weekend storms produced inflows that were well within the expected uncertainty.

“This is good news and large changes to operations have not been required so far,” Watson said.

“While there is, of course, some uncertainly with the two storms through this Thursday, we now look to reduce the water discharges downstream.”

The hope is to hold at about 234 cubic metres per second (m3/s) to limit the environmental and habitat impacts.

BC Hydro’s goal is to generally keep the reservoir level below 220 metres at this time of year for flood risk management.

Meanwhile, the water release down Elk Falls was reduced down to 40 m3/s this afternoon.

BC Hydro will adjust operations accordingly as the week unfolds.

The Upper Campbell Reservoir/Buttle Lake level is currently at 219.2 metres and slowly rising.

BC Hydro expects the Elk Falls Canyon water release of 40 m3/s to last through at least this Friday as well.

Total Campbell River flow upstream of the confluence with the Quinsam River will be around 164 m3/s until then.

Precipitation rates and the rising and falling of the freezing level are key considerations looking into these series of storms well into next week.

Rain, snow, and some snow melt will take place.

On Friday, BC Hydro released a combined 164 m3/s down the Campbell River through the powerhouse and Elk Falls Canyon.

On Saturday afternoon, that volume increased to 234 m3/s.

The water release down Elk Falls Canyon was about 110 m3/s.

As of Saturday, Upper Campbell Reservoir/Buttle Lake was currently at 218.6 metres and rising.

The inflow rate into the reservoir rose to over 600 m3/s before dawn and remained that high into the early afternoon.

If the inflows continue to be high, BC Hydro may need to increase the total water discharge from John Hart facilities to about 350 m3/s.