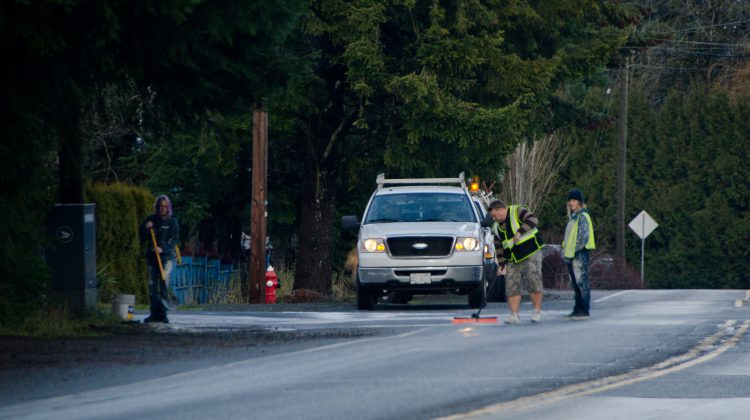 Workers are pictured at the scene of a paint spill at Cumberland and Burgess Road in Courtenay on December 18th, 2018, prior to a city worker coming to the area. Photo by James Wood/98.9 The Goat/Vista Radio

According to a statement released by Courtenay’s municipal government, the undisclosed company spilled an unknown amount of latex-based paint at the intersection of Cumberland Road and Burgess Road this afternoon, and were in the process of washing the paint into storm drains when the city’s public works service arrived on site.

“Upon arrival, City staff confronted the Contractor and told them to immediately cease the washing of the paint from the roadway, as the storm drain flows into an adjacent creek system,” read the statement.

“The City has filed a report to the Province of BC identifying the spill and is taking every available action to mitigate the spill fallout due to the inaction of the negligent Contractor.”

The statement concluded by stating the city will continue to work with the province’s Ministry of Environmental Protection and Sustainability, in order to “secure and safeguard” sensitive waterways.

The repercussions for the contractor are not known at this time.

The city will not have a role in the spill response beyond what action they’ve already taken, according to a statement from the city.

“The City defaults to the Province in cases like this,” read the statement.

“The City’s role is to act as a “first responder” in order to mitigate potential impact. As for repercussions, again, the City defaults to the Province as environmental spill response falls under the jurisdiction of the Province. This work was not part of any City authorized works nor was the Contractor working on the behalf of the City. The City simply jumped in to protect the environment.”