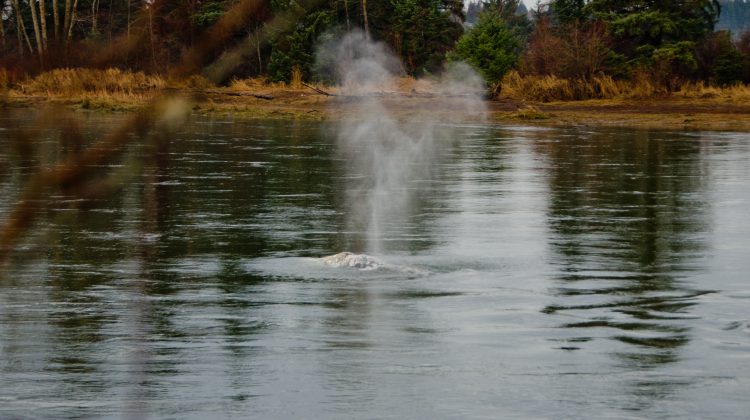 COURTENAY, B.C- The visiting grey whale in the Courtenay River isn’t leaving yet.

That’s according to the federal Department of Fisheries and Oceans (DFO), who told the MyComoxValleyNow.com newsroom that the whale is still upriver.

Earlier today, DFO officials had headed out on the water to try to guide the whale out of the river. 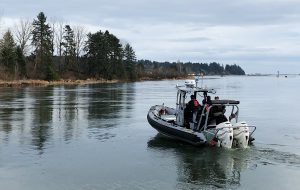 DFO officials head out into the Courtenay River to assist a grey whale out of the estuary on the afternoon of December 19th, 2018. Photo by James Wood/98.9 The Goat/Vista Radio

They returned this evening.

Earlier in the day, Pacific Marine Mammal coordinator Paul Cottrell said it was unusual for a whale to be in the area.

He said their worry is the possibility of the whale getting live stranded in the river.

“It gets pretty shallow out here so we want to make sure that he’s not up here when low tide comes around. We hate to see him live strand and that’s a little more… (it’s) another complication if he live strands,” Cottrell said.

It’s still not known why the whale headed up the river, or whether the animal is male or female. 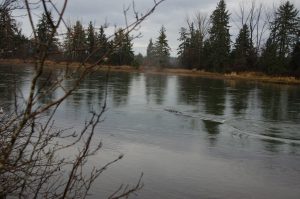 The whale rises in the Courtenay River in the rivermouth on the morning of December 19th, 2018. Photo by James Wood/98.9 The Goat/Vista Radio

Cottrell also touched on the possibility of restrictions on boat traffic or floatplane traffic, if the whale continued to hang around the area.

“We’ll have to see,” said Cottrell.

“It’s early on, we didn’t land until I knew where the animal was, so I knew it was safe, but we want to make sure that human safety is paramount, and also the animals safety, so definitely, if the animal stays in the river, there are going to be things we’ll look at doing.”

The whale was first spotted around 9:50 a.m. on Wednesday near the Courtenay Airpark, and later made its way floatplane ramp. Later in the day, it headed up towards the 17th Street Bridge, and then turned downriver in the afternoon.

Cottrell emphasized that residents who see animals in distress, injured, entangled, or in places they shouldn’t be should call the B.C. Marine Mammals Response Network at 1-800-465-4336.

The DFO will continue their efforts tomorrow.