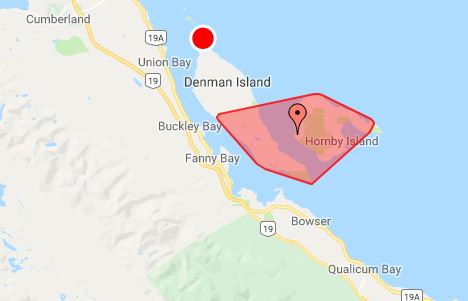 A large portion of Hornby Island has been without power since 7:47 a.m.

The outage, which is under investigation, is East of Island Highway and has impacted 1,729 customers.

Power has been out on Denman Island west of The Point Road since 7:51 a.m. this morning, due to a tree that has fallen across BC Hydro power lines.

The outage is affecting 46 BC Hydro customers.

A wind warning has been issued for:

Very strong wind gusts that may cause damage are expected or occurring.

A powerful low pressure system is quickly approaching the B.C. Coast this morning.

The low is expected to make landfall near central Vancouver Island near noon then across the mainland coast this afternoon.

Sustained southeast winds of 50 to 80 km/h have already developed early this morning over much of the south coast and will increase to 70 to 90 km/h later this morning.

Winds will switch to southwesterly 70 to 90 km/h this afternoon, with stronger gusts likely above 100 km/h. Winds will ease this evening and shift to west to northwest.