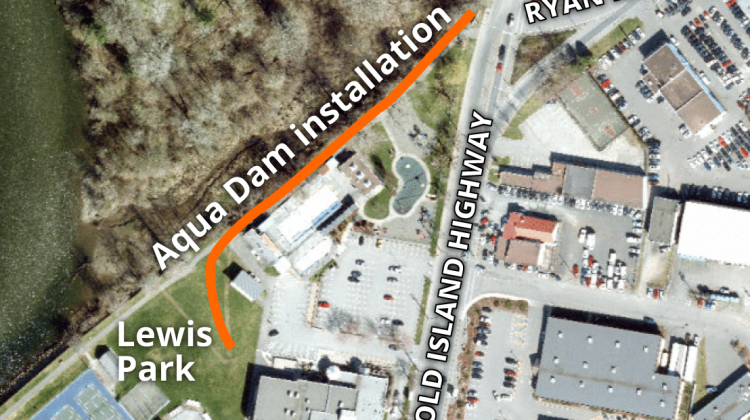 A map of the flood-guard area.

COURTENAY, B.C- The City of Courtenay is installing temporary flood-guards in Lewis Park.

According to a press release from the municipal government, the move is due to predicted high tides this weekend and seasonal storms. The city will be installing the “Aqua Dam” a portable, water-filled flood barrier in Lewis Park.

“No traffic impacts are expected, although some parking will be affected at the Lewis Centre main parking lot to make room for crews and equipment,” read the release.

“The Aqua Dam will remain in place over the holidays.”

The city is also offering free sandbags to residents and businesses, while supplies last, at the following locations.

The city will decide on whether or not to install a second dam on Comox Road between the Old Island Highway and the Highway 19A bypass with other agencies, once more flood and storm forecasts are available.

“Other flood risk measures in place include a Tall Wall, installed permanently in 2016 on Old Island Highway between Ryan Road and Headquarters Road, as well as new one-way check valves in storm drains in the Puntledge Business District to prevent backflow during flood events,” read the release.

“These flood control measures have been developed over the past several years, and are geared at maintaining important transportation links as long as possible and mitigating flooding in low-lying areas.”

Residents are asked to check and clear the grates over catch basins near their property of leaves or debris in order to reduce the potential for flooding.