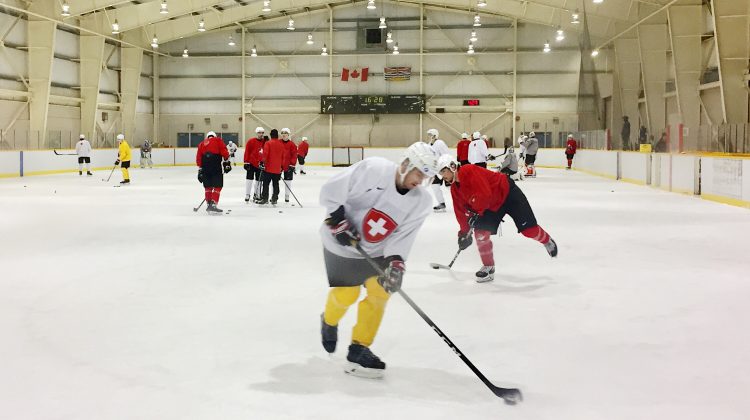 COURTENAY, B.C. – No Nino Niederreiter, no Nico Hischier, hopefully no problem for this year’s Swiss junior national hockey team, that’s been staying and training in the Comox Valley since mid-December.

And while Switzerland’s U20 squad may lack the star power of past editions, it’s a balanced group that may surprise at the 2019 IIHF World Junior Championship taking place in Vancouver and Victoria from Dec 26 to Jan 5.

The Swiss juniors have used the ice inside the Comox Valley Sports Centre as a training ground in preparation for the world tournament.

Asked what he thought of the valley, head coach Christian Wohlwend couldn’t give a definitive answer.

That’s because the team basically sees The Westerly Hotel, and the sports centre on Vanier, and not a whole lot else as it focuses on the challenge that lies ahead south of Courtenay and on the mainland.

“I have to be honest, it is just like everywhere,” Wohlwend said, after his squad wrapped up practice in Arena 2 late Thursday afternoon. “We are in the hotel and we are in the ice rink. We have almost no time. The players need rest, and we have video to prepare for the meetings, and it’s rainy all the time so we have no chance to go out. But it doesn’t matter where we are – Vancouver, Montreal, Toronto – we’re just in the hotel and in the ice rink.”

That said, Wohlwend said The Westerly and sports centre have been a perfect fit for the squad.

“The hotel is amazing… and the facility is perfect for us,” Wohlwend said. “We like it. It’s not too big, we have, here, everything we need. We have two ice rinks where we can use. All perfect.”

He added, “The people are very nice here, they’ve been fantastic to us.”

Defenceman Nico Gross, a New York Rangers draft pick who is set to play in his third world junior tourney offered his review of the North Island.

“It’s a little smaller than probably everyone is used to but it’s really nice,” Gross said. “Since we’re here, it’s raining a lot, that’s kind of not that nice, but the rest is pretty nice.” 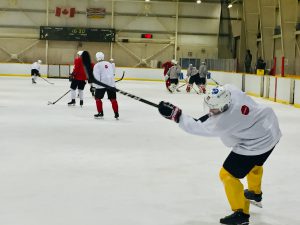 There aren’t a whole lot of holes in this Swiss lineup, but at the same time they don’t have a high flyer with the nameplates Niederreiter or Hischier on the back of their shoulders when they need a snipe.

Team Switzerland does have a few weapons up front, however.

Namely Chicago Blackhawks prospect Philipp Kurashev, taken 120th overall in the 2018 NHL Entry Draft, and Valentin Nussbaumer, who is eligible for the 2019 draft.

Kurashev is off to a strong start with the QMJHL’s Quebec Ramparts, with 43 points in 33 games.

On the back end, Gross will be relied upon heavily to carry the puck and dictate the pace from the blue line.

He’ll have some help in the form of Washington Capitals pick Tobias Geisser, a big two-way defenceman who also has world junior experience.

Wohlwend, who will be coaching in his fourth world junior championship, said he has a “clear No. 1 line” who he will be looking towards to carry the offence.

“But we have four good lines this year, and for us it’s just important that all four lines, that they want to make a difference,” Wohlwend said. “Like Hischier two years ago, his line was amazing around him. We just have a chance to win the games when all four lines produce.”

But for Switzerland to stay with the big dogs like Canada, Sweden, the U.S. and Russia, they’ll have to stick to a system, play solid team defence, and never let their collective foot off the gas pedal.

“The whole package,” Wohlwend said. “We have to play very strong and disciplined, and doing the right thing with the right habits on the offence. Then we’re pretty convinced we can get points from every team.”

Gross said the team will have to manage the puck better than they did in Wednesday’s 5-3 pre-tournament loss to Canada.

“I feel like our team strength is just our speed and just like, play simple and hard,” Gross said.

The Swiss squad is playing one final pre-tournament game tonight against Kazakhstan in Port Alberni.

Then they are back in Courtenay tomorrow for a practice before the tourney begins.

“We had a long exhibition camp and pre-camp and it was pretty hard,” he said. “I’m pretty excited to start it now.”

Team Switzerland lost 8-2 to Canada in the quarter-finals of last year’s world championships in Buffalo.