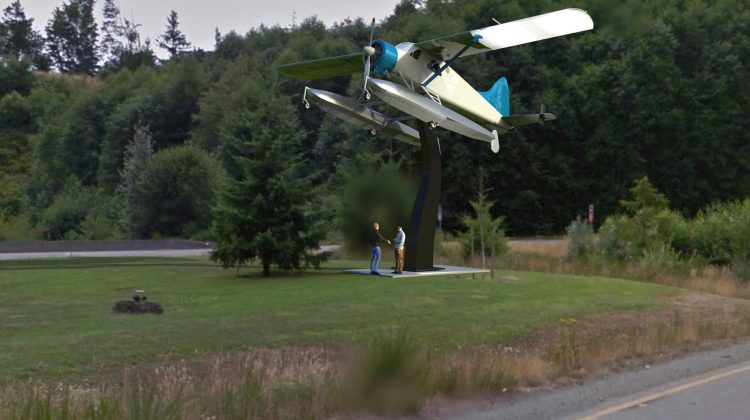 This is what the finished monument will look like, based on plans drawn up by Jonathan Calderwood. Photo courtesy of Grant Illuminated Signs Ltd.

CAMPBELL RIVER, B.C. – A new monument will be gracing the north entrance to Campbell River soon.

Local business Grant Illuminated Signs Ltd. will be building the monument. According to Grant’s general manager Jonathan Calderwood, the plan took four years to take off.

The project was the Campbellton Neighbourhood Association’s idea.

Calderwood said the association had to first go to the provincial government to get a permit to be able to build the monument, as the patch of land is along the provincial Highway 19. The initial permit took two years, and another two years for the City of Campbell River to sign off on other permits.

According to Calderwood, the monument will be a static display.

“Sealand Aviation chose to donate (the airplane)… but it’s a non-flyable one. If they’re flyable, they’re worth almost half a million dollars,” said Calderwood.

Calderwood added they might be able to put up the monument in the summer. The plane is still only partially built, and he said putting it together will take some time.

“It’s a big project. And everybody’s donating time and materials into it. It’s not like a paid project that says we’ll get this done next week.”

“I drew up the designs for everything and then we had an engineer review and stamp it. We’re now at the stage where we can actually build it.”