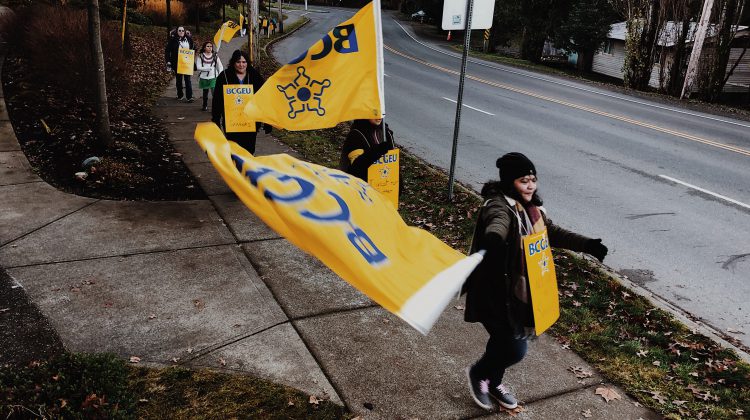 Share Marcelo waves a union flag as she marches in the strike near the Cass Loma Seniors Village along Headquarters Road in Courtenay on December 2nd, 2018. Photo by James Wood/98.9 The Goat/Vista Radio

COURTENAY, B.C- Seniors care workers who went on strike earlier this month have secured a new deal with their employer.

The workers are part of the BC Government and Service Employees’ Union (BCGEU), and work at Caso Loma Senior’s Village and Comox Valley Senior’s Village. They went on the picket lines for better wages and improved worker recruitment, with the strike starting on December 2nd.

According to BCGEU staff representative Doreen Smith, the striker’s bargaining committee recently went back to the employer with the help of a Labour Relation Board mediator, prior to a full scale strike.

“The parties reached a much-improved tentative agreement which was then brought to our membership for a vote,” said Smith, in a message to the MyComoxValleyNow.com newsroom today.

According to Smith, the job action slowed on the morning of December 14th, with a meeting between the employer and the committee all day.

“Our members ratification vote was held at the worksite 11am to 8pm on Monday 17th,” said Smith.

“The vote count completed by a balloting committee the following day.”

Smith stated that the agreement reached recognized and addresses the “key areas” of concern raised by the union, and the majority of union members believed a fair and acceptable agreement was reached.

“61% of those who voted, voted in favour of acceptance,” said Smith.

“Some of the key points are a 4 year collective agreement, back dated to May 1, 2018 so members employed with the employer shall received retro pay.  We were successful gaining additional market adjustments on top of the general wage increases for all members employed.  This was to raise the following classifications more in line with industry wages in the Comox Valley facilities and to acknowledge the recent plus future NDP increase to minimum wages.  Service Support Workers (SSW) which includes housekeeping, food service servers and laundry services. Plus Receptionist classification received an additional wage adjustment upon ratification.  Registered Care Aides (RCA) and Home Support Workers (HSW) gained an additional wage increase above the general wage increase starting January 1, 2019 and again May 1, 2019.  Then Home Support Workers (HSW) who hold the same qualifications as Registered Care Aides (RCA) will become equal.”

Smith stated that the increases helped to bring the employer more in line with other facilities, which would help in the recruitment and retention issues at the facilities.

“Our members still seek a pension, which other facilities have,” said Smith.

“An agreement was reached for the parties to meet within six months to decide the viability of joining the BCGEU Target Pension Plan instead of the RSP option now available to them. We believe that the low compensation package was not assisting the employer in drawing new hires in a field where these jobs are already in demand.  The workers were being forced to cover operations through excess overtime to help run the employer’s operations.  We do believe that being more in line with what others in the profession are gaining will assist in moving forward an ability to draw and retain more staff.”

The picket line was no longer present on Friday afternoon.