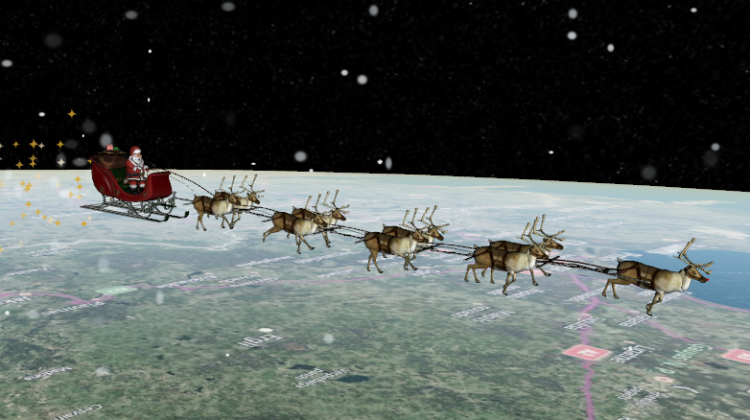 Old St. Nick will be busy traveling the world throughout the day and evening delivering presents to kids for Christmas.

Once again, the North American Aerospace Defense Command (NORAD) has its Santa Tracker online. You can check it out and see where Santa is on his journey.

Captain Cameron Hillier, a public affairs officer with NORAD, said the tracker has been an annual tradition for over 60 years.

“The NORAD Santa Tracker is actually something we’ve continued on now for the last 63 years. It’s part of a tradition that was brought over by our predecessor, Continental Air Defense Command (CONAD), in America,” he said.

“It was (based) in Colorado Springs…a (local) newspaper had printed an ad to promote having kids call in and discuss with Santa. As opposed to discussing with Santa, the number that was given out on that particular ad was actually the number to the operations centre at Continental Air Defense Command.”

He said kids that called in were greeted by Air Force Colonel Harry Shoup, the duty officer at Colorado Springs’ CONAD.

“As you can imagine, in 1955, at the height of the Cold War, it took some time to kind of figure out what was going on exactly,” Hillier noted.

“By the tail end of the conversation however, Colonel Shoup had assured the child that Santa would have a safe flight through the U.S., and he then instructed the rest of his crew to do the same if they received such calls.”

Hiller said that this happened for three years. NORAD picked up the tradition following its inception, and has carried it on ever since.

Hillier said as of this publication, almost 2.5 billion gifts have been delivered across the world.

He said that Santa should be visiting the west coast of Canada between 9:00 p.m. and midnight.

“However, he only shows up if you’re asleep,” Hillier said.

“If you’re not asleep, then he has to make a delay and return to your house later on in the evening when you’re asleep. While he may have been scheduled to show up at your house at nine o’clock, because there’s a whole bunch of kids east of you that didn’t go to bed on time, you’re gonna get your presents late. Let that be a lesson.”

Hiller added that the same military assets that are used to track Santa are the same used to execute aerospace missions and warnings for Canada and the United States.

“Our Royal Canadian Air Force CF-18s are the first jet fighters to escort Santa into North America. These guys are on station 24 hours a day, 365 days a year and that’s part of their mission, they’re always there to intercept potential threats to Canada and the U.S.,” Hillier said.

“However, on the 24th, we have an expected friendly visitor and we’re more than happy to escort him through our air spaces.”

Google also has a Santa Tracker, available at santatracker.google.com.