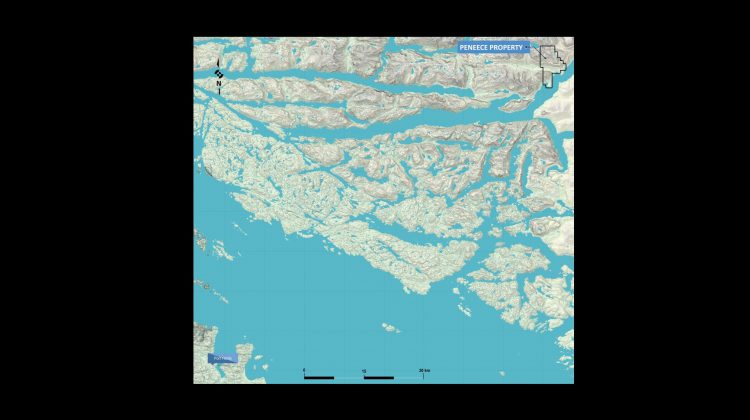 A map of the site in relation to Port Hardy, released by the company and placed on a background by the newsroom.

PORT HARDY, B.C- A new mining operation could be coming to the North Island area.

An exploration company based out of Vancouver, Delrey Metals, has made a move to acquire land at the head of Seymour Inlet, 68 kilometres away from Port Hardy.

Delrey entered into a share purchase agreement with Western Energy Metals for all of their issues and outstanding share capital. The company owned the site at the head of the inlet, known as Peneece, which holds large amounts of vanadium mineralization. 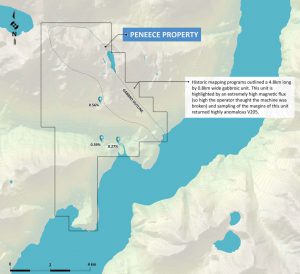 A map of the site, released by the company.

Vanadium is a metal that’s been gaining in value, used in automobiles, jet engines, pipelines, steel production, and batteries.

“Currently 90% of global vanadium production is used as an alloy in the manufacturing of steel, with the grade of the steel proportional to its vanadium content,” read a release from the company.

“New regulations recently emplaced by the Standardization Administration of China (SAC) have eliminated Grade 2 steel rebar production in China, replacing it with Grades 3, 4, and 5, which each consume progressively more vanadium. Global industrial growth and increased building standards in earthquake prone areas are forecasted to keep demand for vanadium strong.”

The company also stated that “Vanadium Redox Flow Batteries” are showing potential for use in renewable energy technology.

“VRBs are non-flammable, reusable over semi-infinite cycles and are shown to not degrade for more than 20 years, which make them an efficient alternative to traditional lithium-ion batteries for grid power storage,” read a release from the company.

“The energy generated by renewable sources such as wind and solar is not constant over time and presents an excellent use case for VRBs to store excess power generated during peak production periods, which can be utilized during seasons with low wind or sun exposure. While the battery technology is in its early stages, the recent commissioning of the world’s largest ever battery, a 200MW/800MWh vanadium flow battery in Dalian, China, is proof that the fledgling technology is progressing at a fast rate. Currently VRBs account for only 2% of global vanadium demand, while many estimates are forecasting the market share for VRB’s to increase substantially as the emerging VRB space continues to grow.”

The company is planning a high-resolution magnetic survey from the air in the near term on the property, as part of their work on the site.

The property itself consist of five tenures covering around 1500 hectares, open for expansion in multiple directions. It’s accessible by float planes, helicopter, or charter launch from Port Hardy.

A network of logging roads from barge-logging is also present within the project area, according to the company.

An earlier magnetic survey flown in the late 1950’s found an “unusually strong and extensive magnetic anomaly”, which was only exceeded by a deposit in southeastern Alaska. However, the core of the site was never sampled during earlier years due to heavy snow cover.

The MyTriPortNow.com newsroom has reached out to the company for more information on their plans for the site.