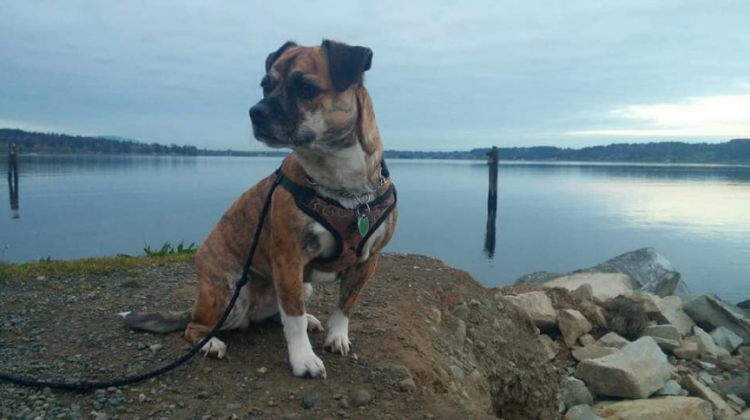 COURTENAY, B.C. – The victim of a Sunday morning car accident is looking for her missing dog.

At around 9:30 a.m. this morning, Shannon Paul’s 21-year-old sister was involved in a car accident.

Paul told MyComoxValleyNow.com that the incident happened around 2991 Back Road in Courtenay. Fire crews, RCMP and BC Ambulance were on scene.

Paul said her sister “apparently has a concussion”, but she doesn’t know exactly what happened.

“I talked to the police officer and they just think it could have been icy roads…probably just more so that the sun was very bright on that road,” she said.

“She (might have) lost control, the car spun around, I think, a couple of times and hit the side of a post, and totally wrecked up someone’s grass and stuff. The whole passenger side of her car was like totaled.”

Paul said her sister was seen “running around frantically looking for her dog”.

“But (she) didn’t really understand, I guess, what happened because she more than likely has a really bad concussion,” Paul said.

Her sister’s dog Daisy, a rescue pup, is now missing after disappearing from the scene of the accident.

“(Daisy) was adopted at about a year and a bit, so she’s probably about four (years old) now,” Paul said.

“She is a Brindle-type like pug almost, she’s a total mix of everything so it’s hard to tell what her actual breed is, but she’s very small. She’s brown and white, (with) a little bit of black, floppy-type ears. She has a pug face.”

Paul said Daisy ran into someone’s farmland off of Back Road.

“It’s fully fenced, but we looked high and low like everywhere, and she may have gotten out from where she got in,” Paul said.

“She could be anywhere from Back Road all the way to farmland, to the Gas N Go on the Dyke (Comox Road).”

Paul noted that Daisy is a “very anxious” dog as she is a rescue.

“She just needs to be back with her family,” she said.

Paul’s sister was taken to hospital as the search for Daisy continues.