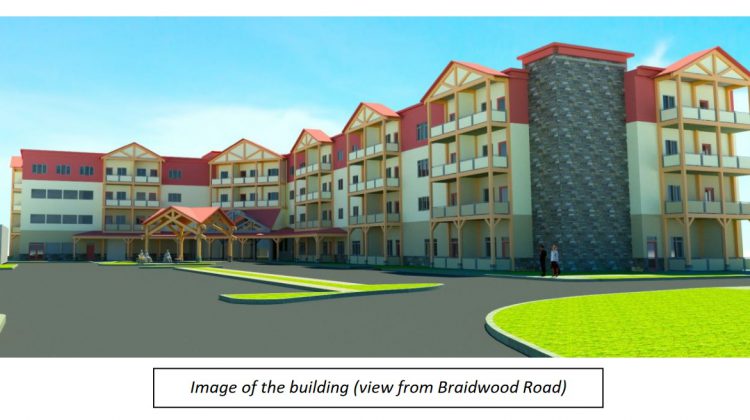 A draft image of the project, presented to council on December 17th, 2018.

COURTENAY, B.C- A major senior’s housing complex could get some changes before coming to the Comox Valley.

The site, which is called the “Atrium on Braidwood”, would be located between the Valley’s current RCMP detachment and the Prime Chophouse, reaching up from Ryan Road to Braidwood.

The facility is being planned by Sussex Retirement Living, an Ontario-based company.

The company is looking to rezone the land to allow for a full-service retirement residence, with multiple levels of care. It would have 143 suites in total, with a mix of living styles, and be four stories in height.

Detailed plans about the facility came to Courtenay council on December 17, and the project may have an obstacle. That obstacle is the desire for a path between Braidwood and Ryan Road, which the developer has strongly opposed in their discussions with city staff.

The opposition is due to the type of residents the company would be housing in the facility, with some living in “memory-care” units. The company feels that those residents would be negatively impacted by nearby foot traffic.

“While the applicant appreciates the desire for a connection, based on the nature of the development and relatively small parcel size, they have expressed significant concerns about a public pathway being incorporated in to the development,” read part of the staff report on the development, passed on to council.

“From the applicant’s stand point, incorporating a public pathway within the site is a significant concern in terms of privacy, health and security of the residents, especially considering the lower level of the building is designed for memory care units. The applicant considers that a public pathway will be perceived unsafe, and consequently increase resident’s concerns and impact the business operation.”

During discussion with council, Ian Buck, the city’s director of development services, stated that the applicants would no longer pursue the project if the city pursued a path. He also described it as a “dealbreaker” for the project. 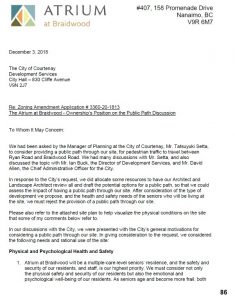 The letter, as included in the report to council on December 17th, 2018. 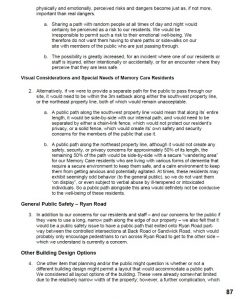 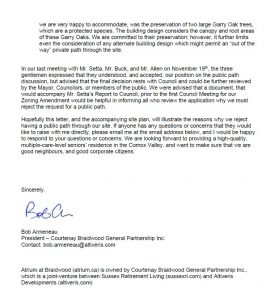 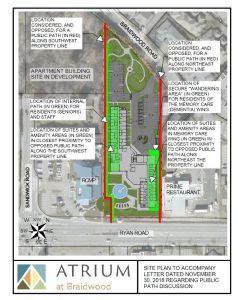 A map of the opposed path locations.

Over 20 residents of the area attended a public information meeting given by the applicant and their business partner, with five staying for the whole thing.

“Attendees were generally supportive of the project. Traffic along Braidwood Road seemed an ongoing concern for the residents,” read part of the report.

“The potential height variance and the public pathway did not seem an issue during the meeting. Staff also attended the meeting and observed that the meeting was well informed.”

Councillor Doug Hillian also asked for the possibility of a covenant between the developer and the city to guarantee some of the units for lower-income seniors, though he did not have a specific number in mind for how many he would hope to see.

Council eventually voted to postpone consideration of a public hearing on the rezoning application, while passing it through first reading.

After the council meeting, Courtenay mayor Bob Wells stated that council is looking to see if the applicants “see value” in what the city is asking for.

He also stated that council wants to have the city as walkable as possible, with the Braidwood/Ryan area being difficult due to a lack of a pathway between the two routes.

“Maybe this isn’t the place for that pathway, but maybe there is a way, talking with this proponent and other landowners in that area,” said Wells.

“Maybe we’ll be able to find a way to solve this.”

The application will be coming back to council in 2019.