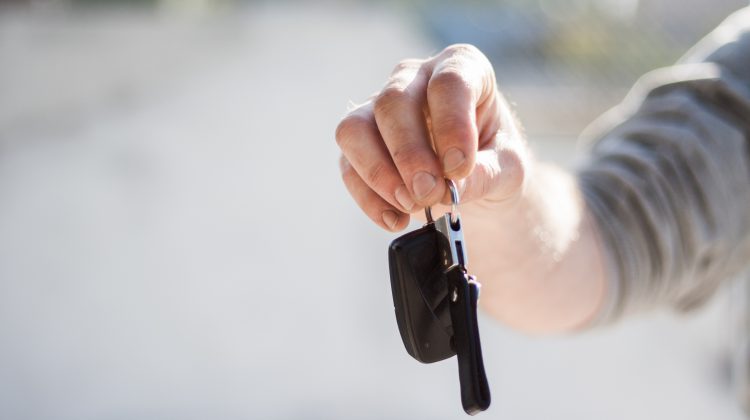 COMOX VALLEY, B.C. – The wheels are in motion, for a designated driver service designed to get New Year’s Eve revelers home safely in the Comox Valley and beyond.

For the third year, Operation Red Bow will offer rides in the Comox Valley tonight and early tomorrow morning with donations going to Kus-kus-sum.

“Anyone can give us a call,” said Operation Red Bow founder Mary Veronneau, who owns Mary’s Café in Comox.

“I turn my café into a call centre for the night and the line’s been open for about three or four days now, taking calls and booking. Even the night of, we send a driver out to pick you up depending on situations. Sometimes we drive the person’s car, but we do encourage people to call us, to get to the party and from the party.”

To use the service, call 250-941-0999. For more information visit [email protected] or visit maryscomoxcafe on Facebook. 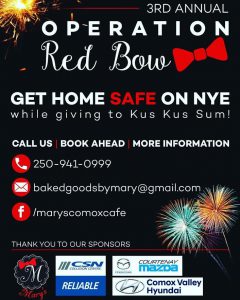 Veronneau said most of the volunteer drivers have a partner, and receive calls via text from the dispatcher at the café.

Areas covered include Royston, Cumberland, Courtenay, Comox, and as far north as Black Creek and Merville.

There are currently a handful of volunteers with others on call after 8:00 p.m. Phone lines will be open as late as 4:00 a.m.

“We are set up to take a lot of volume,” Veronneau said. “All our volunteers are ready and cheerful.”

Clients can get a ride home in their own vehicles, or in ones provided by Operation Red Bow sponsors Reliable, Comox Valley Hyundai, Courtenay Mazda, and CSN Collision Centre.

“We ask that people tell us ahead of time (if they need a ride home in their own vehicle),” Veronneau said.

“Just to make sure the partner who is with the driver is able to give the ride.”

The goal is to keep the roads safe from impaired drivers and to take donations for the cause, which changes each year.

This year, all funds go to Kus-kus-sum.

As part of its Estuary Stewardship, Project Watershed  plans to restore the Field Sawmill site. The site has been named Kus-kus-sum by the K’ómoks First Nation.

In September 2017, Project Watershed and the K’ómoks First Nation  reached an agreement with Interfor to purchase and restore the former Field sawmill site on the Courtenay River near the 17th street bridge.

The vision is to create vibrant and productive habitat and connect it to Hollyhock flats, which is adjacent to the site and one of the most productive areas in the Estuary.

Veronneau said the service is provided “for the love of the community.”

“That’s why we it every year and we try to accommodate.”

The service was born from sheer frustration.

“I wanted to volunteer my time and there was no place for me to help people get home and be able to go out,” Veronneau said.

“I was completely frustrated. That’s how it all began. It was supposed to be one car with my friend answering phone calls and maybe we would drive a handful of people. We ended up driving hundreds of people home and raising a ton of money. It was awesome. We just did it every year and every year it ends up getting a bit bigger.”