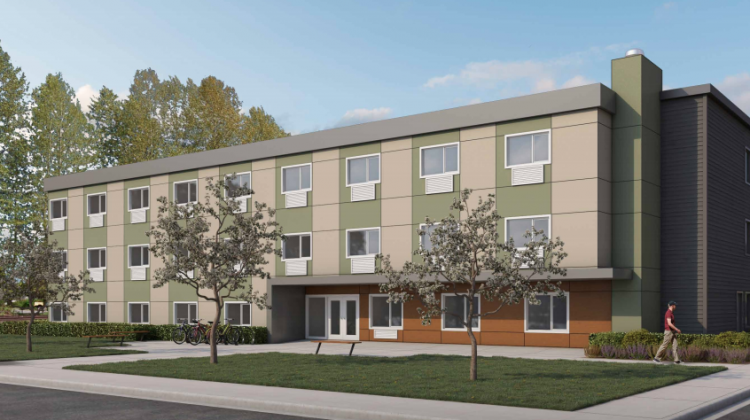 A concept image of the supportive housing facility. Photo courtesy BC Housing and The John Howard Society of North Island.

COURTENAY, B.C. – 46 individual modular housing units are set to be shipped to Courtenay early next month.

According to the City of Courtenay, the units will be delivered to 988-8th Street, which has been chosen as the site of a supportive housing project through BC Housing.

The pre-constructed units will be installed on the site of the project. The supportive housing facility is expected to be complete by next spring.

“While traffic impacts are expected to be minor, we ask commuters for their patience and understanding as the delivery trucks and pilot vehicles make their way into Courtenay,” read a notice from the city.

According to the notice, the units will be delivered into Courtenay by way of Duncan Bay Main, Comox Logging Road, Lake Trail Road and 5th Street.

The delivery will be ongoing until the end of March.

The John Howard Society of North Island will operate the facility, and staff will remain on site 24/7 to support residents.

People who apply to live in the facility will have to meet certain eligibility requirements around income, homelessness as well as support and program needs.

Residents will be low-income individuals over the age of 19. 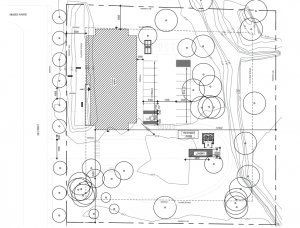 The site plan for the facility, courtesy BC Housing and The John Howard Society of North Island.

Meal programs will be made available, along with life and employment skills training, and health and wellness supports.

The city said that a vendor from outside the Comox Valley is building the Courtenay modular housing units.

“The specialist based in Cumberland was busy building for other BC Housing projects on Vancouver Island,” read the notice from the city.

“The priority is getting the units built and installed as quickly as possible.”

A public hearing on the proposed project took place on May 22nd, 2018.

On June 11th 2018, the City of Courtenay approved the proposal for the supportive housing project.

A neighbourhood information meeting was held on August 13th. Representatives from BC Housing and The John Howard Society of North Island were in attendance.

Documents from that meeting, and more details on the project, can be found at bchousing.org.