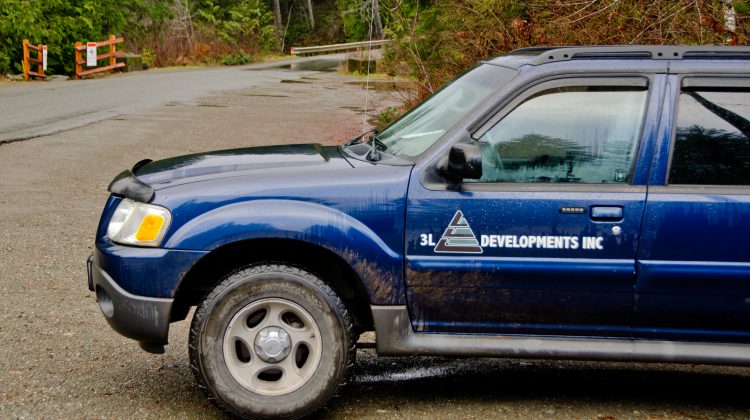 The truck of a 3L employee is pictured near the Duncan Bay Main bridge crossing over the Puntledge River on the morning of January 4th, 2018. Photo by James Wood/98.9 The Goat/Vista Radio

COURTENAY, B.C- Stotan Falls will remain closed to the public for the foreseeable future.

On Thursday, 3L Developments Inc announced a closure for all of the Riverwood lands near Courtenay, where 3L has been aiming to develop a new area for housing in the Valley.

The move is the latest part of a dispute between the company and the Comox Valley Regional District (CVRD), which has now gone to court.

The district has filed a response to the petition, which disagrees with every point raised by the company. The next appearance is set for this month in Vancouver.

The announcement included a section blaming the CVRD for the decision, stating that they “clearly have taken a position” that they don’t want the rivers or Stotan Falls to be part of the regional park network, and that they want the area to remain in private hands.

“As such, the land owner is no longer willing to take the liability risk,” read the announcement.

“Closure of the lands will cost the landowner money for fencing and patrols but the risk of problems is too high around the rivers, and as such, the owner has no option but to close the lands.”

As of Friday morning, a 3L employee is parked at the approach to the bridge over Duncan Bay Main, with more private security in the parking lot past the bridge crossing. A “Road Closed Ahead” sign is also mounted along the road, shortly before the bridge. 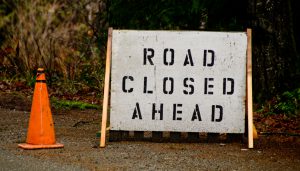 The “Road Closed” sign is pictured near the Duncan Bay Main bridge crossing over the Puntledge River on the morning of January 4th, 2018. Photo by James Wood/98.9 The Goat/Vista Radio

At least one recreational organization in the Valley has already been affected by the closure of the lands.

In a letter dated December 31st, 2018 to the Comox Valley Disc Golf club, landowner David Dutcyvich notified the club that the land would be closed as of January 3rd, due to liability and insurance requirements.

“There will be absolutely no trespassing, and it will be enforced”, read the letter.

The letter goes on to state that Dutcyvich had hoped to keep the area open, and proceeds to blame five residents of the Valley and “past and present CVRD staff and board members” for contributing to opposition to stop the development.

It ends with Dutcyvich saying he understands it will take time and organization for the club to remove their property, and invites them to get in touch with the company to set up the removal.

According to Kabel Atwall, 3L’s project manager, the closure is not being looked at as a temporary situation.

Speaking on Friday, Atwall stated that existing gates within the Riverwood property would be used during the closure, with additional fencing being placed along the trails in the area to close them off.

Two employees of the company were already on-site on a regular basis, according to Atwall, due to equipment in the area. Further details on additional security plans by the company were not available at the time of this publication.

The next appearance in the legal dispute between the CVRD and 3L is set for this month in Vancouver.