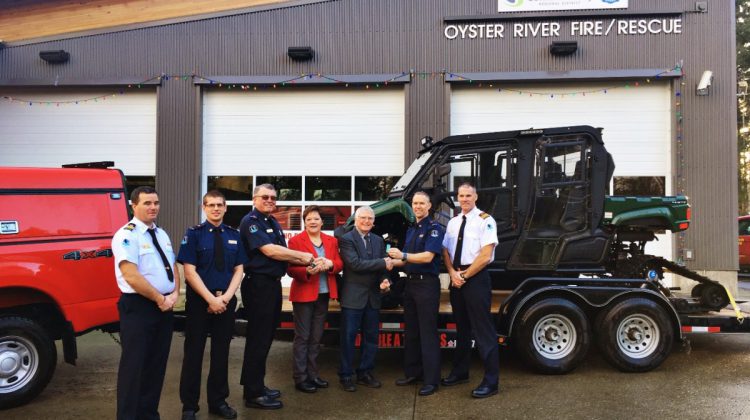 According to a notice from the Comox Valley Regional District (CVRD), the Oyster River Volunteer Fire Rescue Association has used funds received from when the service assisted in the fight against wildfires in 2017 and 2018.

The vehicle replaces an “outdated, and oversized” F-550 to allow for better rescue scene access and maneuverability, according to the CVRD.

The other purchase is a 2018 utility vehicle (UTV), which will be used in the Oyster River area during the summer. It’s currently being used on Mount Washington, because winter weather conditions block the access of fire engines to many parts of the mountain, according to Fire Chief Bruce Green.

“A UTV is an all-terrain vehicle that seats six people and with this one, because of the winter conditions that it’s going to be used in, we’ve put tracks on it, so it’s similar to a snowmobile,” said Oyster River Fire Chief Bruce Green, speaking with MyComoxValleyNow.com.

“There’s several areas of the mountain where the fire trucks can’t get to in the winter, and the UTV will allow us to take firefighters and equipment there to fight any fire that may occur up there,” Green said.

He added that the department purchased the equipment using funds received from helping fight the wildfires of 2017 and 2018.

“We were deployed to the interior in 2017, and stayed at home and helped the Coastal Fire Centre fight the fires on the Island last year,” he said.

“With some funds the Association received from that, they graciously purchased this equipment and donated it back to the community.”

The reception from the CVRD has been positive.

“Since Oyster River Fire Rescue provides fire protection to residents and property owners of Mt. Washington as well, it’s great to be able to utilize this piece of equipment effectively in both of these fire protection areas,” said CVRD Electoral Area C Director Edwin Grieve, in a release.

Green added that the new vehicles will help save taxpayers $120,000.

“It’s nice to see the Association working with the fire department to provide a cost-effective service for our communities.”

Green said the older duty officer truck has been repurposed over to the Hornby Island Fire Service, and he believes it will be used as a rescue vehicle on the island.