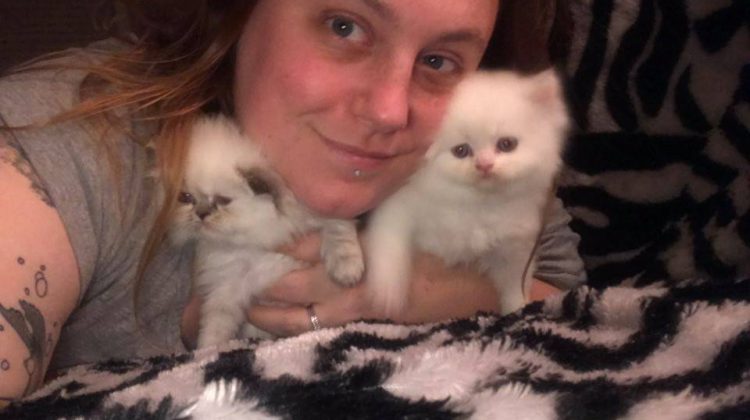 COURTENAY, B.C. – Jessy Mills-Walker feels lucky to have walked away from a rollover car crash in the Comox Valley.

“I’ve only ever gotten in small accidents, you know?” she told the MyComoxValleyNow.com newsroom.

“If you’ve lived in this town you’ve probably hit a deer. That’s the most (type of) accidents I’ve ever been in. This was so much different and I’ve been through some really crazy, horrible things and this has left me with massive shock and anxiety.”

The care aide was driving her client’s van back to his house on Dec. 30 when she began to slow down for a stop sign at the corner of Railway Avenue and Headquarters Road in Merville.

But the van didn’t slow down; instead, its wheels started sliding on a patch of ice.

“If anything, I started to speed up because it was slight decline on the road,” Mills-Walker said.

“It (the vehicle) just kept going faster and faster.  It felt like the brakes had totally failed but it was just because it was solid ice.”

Mills-Walker felt helpless. She tried turning the wheel but it only moved slightly.

A second later, her world turned upside down.

The van rolled “a full 360,” Mills-Walker shared, then did another half roll into the ditch before coming to rest in the woods.

In shock, Mills-Walker was stuck in the van, hanging from the seat-belt.

She was afraid to move.

“All of the windows were smashed so I couldn’t really see out of them, so I didn’t know what position I was actually in or where the van was,” Mills-Walker shared.

She said it was a very “discombobulating” experience.

“I didn’t know what was what,” she said.

Passersby saw the van and called 911.

When Courtenay firefighters arrived, Mills-Walker was still in the driver’s seat.

“They were trying to secure the vehicle, (to) make sure wouldn’t keep rolling,” Mills-Walker said.

The interior of the van was littered with shattered glass.

“They had to undo me and remove the seat and kind of pull me through the van on a stretcher,” she said. “But then they couldn’t get me out because the lift in the back of the van wouldn’t move.”

So the emergency responders had to cut the back corner of the van to get access to Mills-Walker and pull her out.

She was then taken to hospital to get checked out.

Mills-Walker thanked the first responders, noting that they were “very kind.”

“I would say thanks for rescuing me, I would have died out there alone had I not been rescued like that,” she said.

However, she was unimpressed with her wait in the Comox Valley hospital’s emergency room.

“I waited for a really long time to be seen by anyone,” Mills-Walker said. “It was a bad night at the hospital for me. When you go there you expect it to be (an) as-needed basis but they treated as a first-come, first-serve basis.”

She said people who were, in her opinion, less-serious condition were treated ahead of her, adding that she didn’t receive any pain medication until 1:00 a.m.

In response to a query from the MyComoxValleyNow.com newsroom, Island Health noted that upon arrival at the emergency department, patients will be assessed by a triage nurse and seen by a physician on a priority basis.

According to Island Health, on arrival at the emergency department patients are assessed by a triage nurse and seen by a physician on a priority basis.

Examples of urgent medical conditions include but are not limited to:

To submit a complaint to Island Health, click here.

All complaints are taken seriously and investigated, according to Island Health.

Meanwhile, Mills-Walker’s message to drivers is take extra care on the roads, especially in icy conditions and particularly when driving through wetland areas.

“Be extra diligent and go way slower than you even think you need to go,” she said. “And even if you think you know a road, don’t even attempt it if you don’t have to – not on nights when it’s that cold because it’s not worth it… it’s really not worth it.”