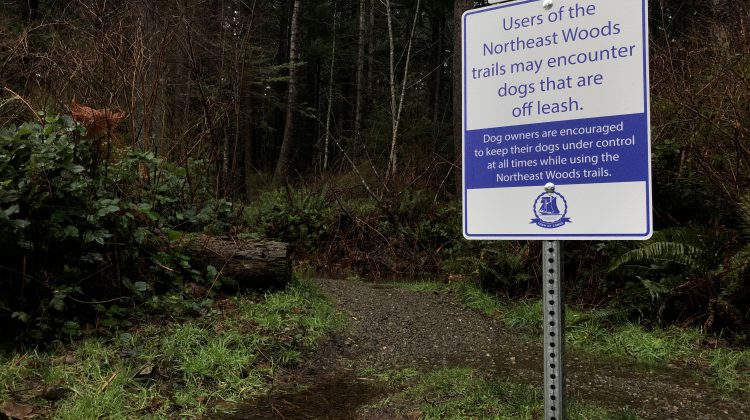 File photo of the sign at an entrance to the North East Woods. (Vista Radio staff)

COMOX, B.C. – The Town of Comox wants to hear from residents about a future off-leash dog park.

At Wednesday’s Committee of the Whole meeting, members approved a recommendation to launch a public process, with regards to proposed sites for a park.

“I’ve heard from others in the community that they’d like to see a public consultation process and I think given the interest in this, that’s it’s probably a good thing to do,” said Comox Mayor Russ Arnott.

Arnott said the “best way forward is to engage the public, for or against this issue.”

Town CAO Richard Kanigan said the cost estimate would be between $20,000 and $30,000, depending on how comprehensive Council may wish to have that process, and the length of time it will take to run it.

This process could include surveys and public meetings.

According to a report from the Town’s Superintendent of Parks Allan Fraser, possible locations for future off-leash/leash optional dog parks include the Northeast Woods and the “underutilized sport field” adjacent to the Comox Community Centre.

Regarding the sports field, Fraser notes, “the field by in large sees very little programmed activity, and is situated in a central location with existing support infrastructure proximal to the site. The field is very flat, relatively well drained, close to pedestrian routes, with safe and open sight lines.”

A fenced dog park such as this would come at a capital cost of approximately $50,000 and $75,000, dependent on the number of design features incorporated, the report said.

The ongoing general maintenance costs associated with a project such as this should be between $20,000 and $30,000 dependent on how many times the infill mix is removed and refreshed.

Meanwhile, the staff has created a blueprint for future off-leash dog parks in the Town.

At its regular meeting held on Dec. 5, council passed a resolution directing staff to prepare a report outlining possible locations and costs for creating a dog park and/or a leash optional park.

A report presented to the Committee of the Whole included general information, suggested locations, and approximate costs for both a traditional fenced dog park and a leash optional dog park.

Optional amenities would be site lighting, restroom facilities, notice boards, and dog equipment such as jumps, ramps, and tunnels.

As for location, the report notes that it is often determined by the location of available land; however, this may not always be the most appropriate location.

According to the report, a good location should be easily accessible by road, have adequate space for off-street parking, and connections to existing pedestrian paths, walkways, or trail networks.

It should also be within walking distance of residential areas , have good surveillance from public areas, and be in proximity to compatible use/activities.