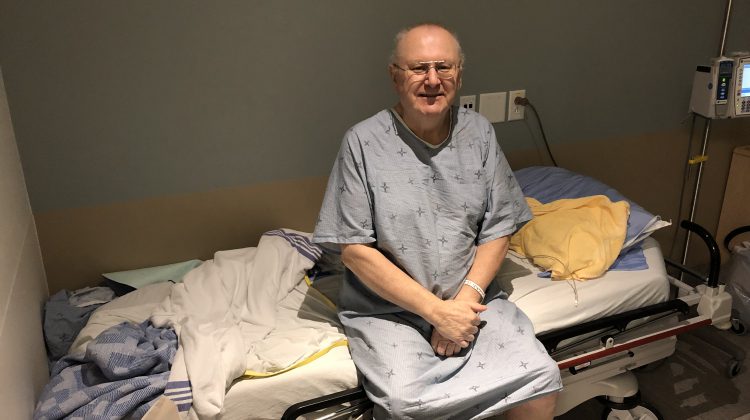 Frank Johnson spent his nine-day hospital stay on a stretcher because there were no vacant beds. He was moved to a room that only had enough space for a stretcher. Photo by Twila Amato/99.7 2Day FM/Vista Radio.

CAMPBELL RIVER, B.C. – A Campbell River couple is speaking up about overcrowding during a recent hospital stay.

Frank Johnson went to the hospital nine days ago due to severe stomach pains.

He spent the first four days of his stay on a stretcher out in the hallway.

After that, he was transferred to an overflow room with no immediate bathroom access, still on a stretcher. He was eventually moved to a room that only had enough space for a stretcher.

Johnson had gallstones removed last year, and he said that nurses and doctors thought his stomach pain might be connected to that. They scheduled an MRI, but they’ve had to reschedule twice. Now on his eighth day at the hospital, Johnson still has not been diagnosed.

Johnson said he was told the hospital staff could not find a bed for him.

“There are no beds. The hospital is full. They told me that on a daily basis, there are at least ten people in the hallways,” said Kelly, Johnson’s wife.

Regarding care, Johnson and his wife said he received what he needed. The Johnsons said there were no issues with care at all.

“Anything I ask, I get, that kind of thing. It’s more… there’s no excuse for this,” said Johnson.

“This is a pretty hard bed. Well, it’s not a bed, it’s a stretcher. And they won’t bring in another bed because they said there’s not room for it (in the current room he was placed in).”

The Johnsons were told that the room Frank is staying in can only hold one hospital bed, as per health and fire regulations. They said that if a bed frees up they would have to put it out in the hallway.

Kelly posted her husband’s predicament online, and residents poured in to support her. Some shared similar stories.

Dermot Kelly, executive director for Island Health’s Geography 1, said Island Health does have an over-capacity protocol when facilities experience an influx of patients.

“We’re looking at being able to continue to invest in community resources to help support timely discharges and enhance services within the community,” Kelly said.

“Roughly over the past year, we’ve increased our home support and community support by 15%, and we’re continuing to do that.”

Kelly added that the colder season has seen a huge influx of patients being admitted, which is why the hospital is over-capacity.

The Johnsons alleged there are spaces in the hospital, but no one to staff them. When asked about this, Kelly said staff shortage is not a contributing factor to patients being placed in hallways.

“From a staffing shortage, those two aren’t related matters. From a hallway perspective, that would be related to being over-capacity.”

“We work very diligently to ensure that we fill all staffing vacancies. There’s a recruitment strategy that we do have in place and in many instances, we will partner with agency organizations that help ensure that we have the appropriate staffing to be able to care for the patients that are in the hospital.”

When the hospital is experiencing over-capacity, Kelly said Island Health tries to staff facilities to account for the number of patients, so everyone can receive care, even if they don’t have a bed or a room.

Kelly added that there are times that the hospital is not over-capacity and patients are not placed in hallways, but that the health authority does its best to deliver care to everyone wherever they are in the facility.

Frank Johnson has now been discharged. According to his wife, there doesn’t seem to be anything wrong.

The Johnsons said they will use their experience to effect change. They hope to get in contact with the provincial government.