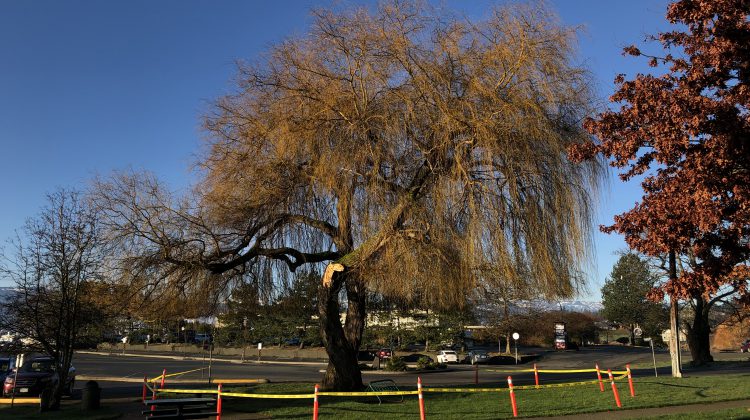 The damaged tree is pictured on the morning of January 14th, 2019. Photo by James Wood/98.9 The Goat/Vista Radio

What’s being described as an ‘iconic’ tree near the Comox Harbour is surrounded by yellow tape today.

During the most recent windstorm, a significant branch broke off the tree on the west edge of Marina Park.

The willow tree has been in a state of decline for many years, according to the Town of Comox’s superintendent of parks Al Fraser.

“We’ve been monitoring it as time goes on,” Fraser said. “With that branch coming off, we just wanted to err on the side of caution and identify that that area around the tree is a no-go zone for the short term until we have a full-blown arboricultural assessment done to the tree.”

A consultant will be inspecting the tree to see what can be done.

Fraser said it was too early to say whether the tree would have to come down.

“All good things must come to an end,” he said. “I’m not going to suggest that it needs to come down right at the moment, (but) I can’t rule it out. We’ll go through the exercise and see what the outcome from the assessment (is), and then move forward from there.”

Fraser has been in the valley since 1979 and the tree was in place at that time, so he guessed that it has been there for roughly 60 years.

“That’s a guess,” he said. “I know it was there before the Marina Park was constructed.”

Fraser said the Marina Park was established back in the 1970s by reclaimed dredge material that was hauled out of the bay, when the marinas were constructed.

“So yeah, it’s a pretty iconic piece of the former foreshore,” he added.