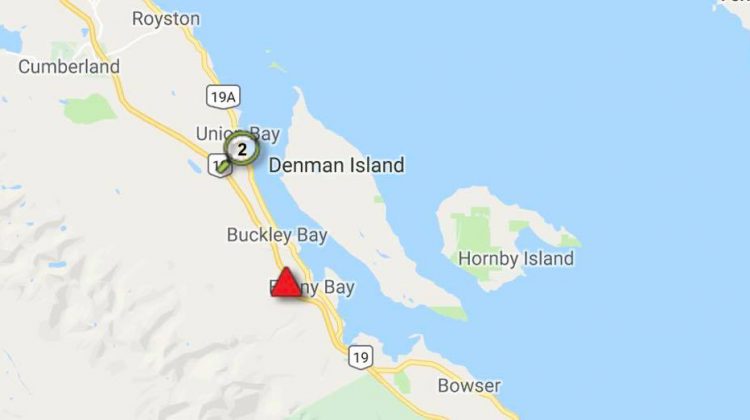 An image of the closure following the crash, courtesy DriveBC.

He noted that the pickup truck went off of Highway 19 and ended up in the grass median just before the Cowie Creek bridge. He said the vehicle crashed through the guardrail and the vehicle ended up partially in the creek.

Fortunately, the occupants were not submerged in the water and all five were recovered. Search and rescue crews from the Arrowsmith region and Comox Valley Search and Rescue assisted in getting the occupants to emergency crews.

“They were all recovered and transported to the hospital,” Nowak said.

“Four ended up at the Comox Valley hospital, and one person was airlifted to Victoria as her injuries seemed to be more severe, but they were all expected to make a full recovery.”

Nowak noted that at this point, there has been “some indication” that the collision was caused by a “driver error” due to the sun glare along the road.

“He was travelling southbound and the sun was quite low after a full day of skiing at Mount Washington, but no alcohol or aggravating factors are present,” he said.

He added that there were three adults in the vehicle, in their late 20s and early 30s, along with two children, age 10 and 11.

“The vehicle was not recovered until this morning, so we have to look at what we can recover from that, and then we will be putting it all together,” Nowak said.

“They were travelling southbound in the passing lane, but they were not passing at the time. There were other independent witnesses that saw it, and they did not indicate any dangerous (notices) about their driving, so it does appear to (have been caused) by a temporary distraction caused by the sun glare.”

Southbound lanes on Highway 19, south of Cumberland between Buckley Bay Road and Hastings Road were closed for about 90 minutes after the crash.

A detour was in place along Highway 19A while the closure was in effect.