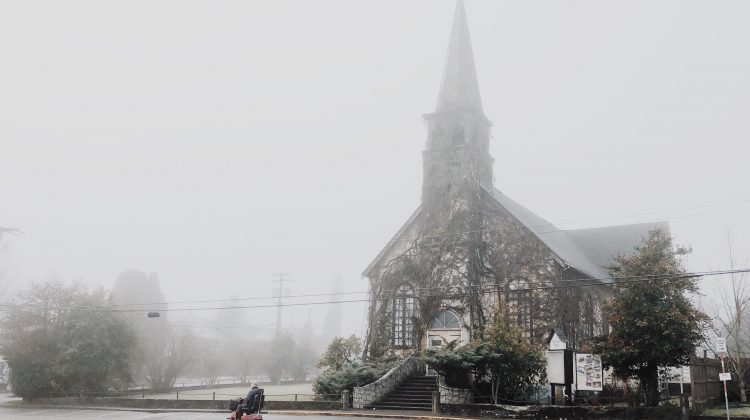 Fog is pictured near the Old Church Theatre in Courtenay as a man passes by on a scooter on January 15th, 2019. Photo by James Wood/Vista Radio

VANCOUVER ISLAND, B.C. – It’s going to be difficult to see this morning.

Environment Canada has issued a fog advisory for Eastern Vancouver Island and the Sunshine Coast.

Areas affected include Courtenay to Campbell River, Duncan to Nanaimo and Nanoose Bay to Fanny Bay.

For the Sunshine Coast, areas impacted by the advisory are Gibsons to Earls Cove, and Saltery Bay to Powell River.

“A strong inversion over the south coast has trapped an extensive area of fog over the Strait of Georgia. Fog has moved onshore at many locations near the Strait and is reducing visibilities,” read the advisory.

The weather agency said that near zero visibility in fog is expected.

“Visibility may be significantly and suddenly reduced to near zero. If visibility is reduced while driving, slow down, watch for tail lights ahead and be prepared to stop,” said the notice.

The foggy conditions are expected to continue into Wednesday morning.