‘It looks like everyone is avoiding helping us’: Mariner Apartments tenant 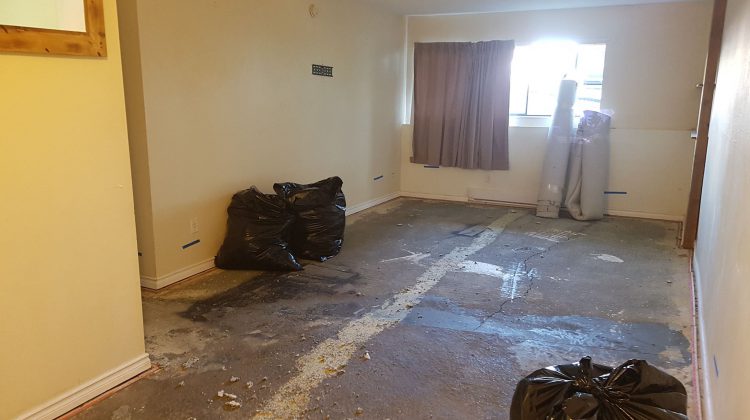 COMOX, B.C. – Tianna Franklin said she lost “90 percent” of her furniture and is now living in a trailer with five people, after being displaced by Thursday’s flood at Mariner Apartments in Comox.

And she considers herself one of the lucky ones.

On Jan. 10, Franklin and other tenants were forced to leave their homes after a water main burst on Aitken Street, resulting in major damage in the units on the apartment’s first floor.

“I’m fortunate that I have family that I can stay with, but there are other tenants who aren’t as lucky,” Franklin told the MyComoxValleyNow.com newsroom.

“One woman on my floor has been staying in her apartment including last night, because she has nowhere else to go. And the apartments now have mould in them, and any of the contractors going in are wearing face masks.”

According to Franklin, the working timeline to repair the damage is six to eight months, however Comox Mayor Russ Arnott told the MyComoxValleyNow.com newsroom that tenants could be out of their units for as long as year.

Franklin lived in apartment No. 104 with her husband and sibling, and was directly impacted by the flood.

“On Thursday morning, it was only flooding for about 45 minutes,” she shared. “But in that time, there was six inches of water in the bottom floor of my building.”

About three inches of water seeped into Franklin’s unit, which allowed her to salvage more of her things than her neighbours.

“But there were parts of the building that had six inches of water,” she said.

Only one of the 17 apartments had tenant insurance. Franklin acknowledges that tenants are aware that insurance is a good idea, “but hindsight is 20/20.”

“We found out that there is no relief coming from the Town of Comox,” Franklin said.

Just who is liable, whether it’s the building’s management company or the Town, is being debated, she added.

“I’m getting mixed messages,” she said.

Currently her focus is finding a place to live and raising money through a GoFundMe page that she has set up to help displaced tenants.

With no immediate financial relief in sight, Franklin said many of the tenants are struggling to find shelter.

“We have somewhere to go, most of our stuff has been salvaged, I consider myself one of the fortunate ones,” she said.

“It looks like everyone is avoiding helping us. All of the local resources that we have been referred to, including the homeless shelter and the Red Cross, they’re pretty much full. There aren’t spaces available. For the people who are living on the street, there isn’t room for them, let alone room for us who had houses.”

And, according to Franklin, there has been confusion over the refund cheques that will cover the rest of the month’s rent and damage deposit.

“For situations where there are more than one tenant in the unit, they’ve put both names on the cheque, which obviously doesn’t work if you are roommates… you don’t have a joint chequing account.”

The MyComoxValleyNow.com newsroom has reached out the building’s landlord owner for comment.