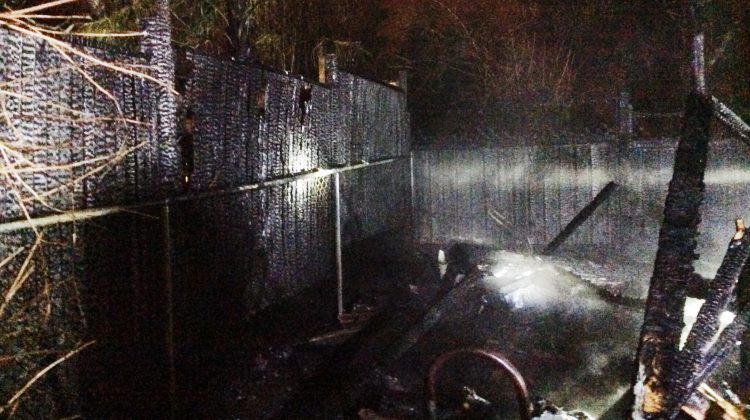 A shed in Comox was destroyed by fire on Wednesday night. Photo courtesy Comox Fire Rescue

At roughly 8:30 p.m., Comox Fire Rescue members were called to a fully involved shed fire at the 2000 block of Bolt Avenue.

“We had a crew here at the fire station that night doing some training, so they were able to respond fairly quickly, knocking down the shed fire,” Fire Chief Gord Schreiner said.

However, the fire cracked a window and melted the siding at the back of a home on the property, and a neighbouring house suffered some siding damage, as well.

The shed was located roughly 15 to 20 feet away from the house on the property.

It was also nestled up against a fence, and as a result the flames charred a couple of wood panels.

“Both houses are still habitable and the fire has been extinguished,” noted Schreiner.

One occupant was inside the house on the property.

“(She) evacuated her house during the fire,” Schreiner said.  “She was able to re-occupy the house after the fire.”

While it only took firefighters about 20 minutes to fully extinguish the fire, they were on site for about an hour-and-a-half in total to ensure all of the hot spots were put out.

“We did exactly what the fire department is designed to do,” Schreiner said.

“We couldn’t do anything about the shed, it was well involved when we got there, but we were able to save the homes in the neighbourhood so that’s exactly what we try to do.”

“We still don’t know what caused the fire so we’re going to go look at that this morning,” Schreiner said.